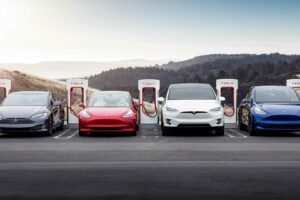 Driving an EV on a road trip should make it clear whether charging infrastructure is up to snuff.

CNBC‘s host Brian Sullivan recently took a road trip across California in a new fully electric vehicle. He shared a preview of his story on the network’s “After Hours” program. Essentially, Sullivan reports on how third-party public charging networks differ from Tesla’s Supercharger network.

With plenty of talk of a future of EVs all over the news – mostly due to the government’s infrastructure bill, as well as Tesla’s global success – the topic is seeing an increase in coverage. Tesla has had its own proprietary fast-charging network for years, and it’s constantly growing and improving. In the meantime, several other charging networks are working to catch up, but they still have a long way to go.

Sullivan didn’t actually drive a Tesla on the trip, but rather a Polestar 2. The Polestar 2 is a full electric fastback that competes with the Tesla Model 3 and Model S. According to the EPA, the Polestar 2 gets 233 miles of estimated range. Sullivan shared:

“Electric cars are awesome. They are fast, are fun to drive, they’re quiet, highly technical some cool features. But on a road trip longer than 200 miles, you are gonna have to stop. You may have to stop in an area where you don’t want to stop, where there’s not much to do, where some of the charges are not as fast as advertised.”

As Sullivan and his team neared the end of their EV journey, it became clear the struggles some non-Tesla owners are facing as they try to charge their cars at public stations. They basically stood in a hot gas station parking lot for a long time waiting for the Polestar to juice up. Sullivan pointed out that Tesla Supercharger stations offer owners much more than just rapid charging.

Tesla plans to continue speeding up its Superchargers, expanding current stations, and adding more stations. In addition, it recently announced that it will open up the network to other electric vehicles.

Check out the short video newcast and scroll to the 1:24 mark for the section about EV charging. Then, scroll down and leave us a comment.