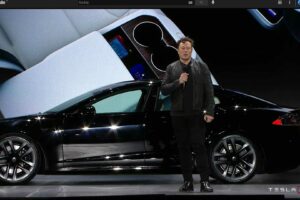 The official delivery event for the Tesla Model S Plaid was last week and it lasted for 30 minutes.

Now even though the Tesla Model S Plaid delivery event wasn’t the longest, with the official presentation taking about half-an-hour, maybe that’s still too long for some people. If you want to get the gist of what was discussed at the venue, then check out this short video that focuses on the main moments.

Elon Musk took the chance to remind everyone that the delivery event for the first ever Tesla Model S was over 9 years ago – almost a decade, as he points out. He takes the time to look at how the Model S has been improved over time, in all the areas that matter: range, performance and charging speed. In all these areas, the Model S is still a leader, even though it is getting a bit long in the tooth.

The Model S Plaid is the fastest accelerating mass-produced car in the world. Yes, the Rimac Nevera is slightly quicker, but only 150 of those will ever be made and they cost a cool $2.5-million each before you start adding options. And even in spite of the price difference between the two, the Model S will not be far behind the Rimac, at least at lower speeds because the Croatian car has a top speed of 412 km/h (256 mph).

The Tesla does still top out at 320 km/h (199 mph), but in order for it to be able to achieve that speed, it will require special wheels and tires that are currently not available for it. In other words, none of the vehicles delivered on June 11 can actually hit the stated top speed; the wheels that will allow it will be revealed in the next few months, though.