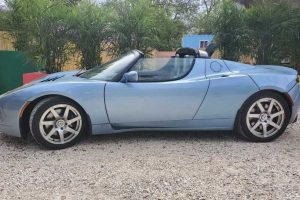 Getting a used Tesla Roadster just got much more expensive.

Posted on EVANNEX on February 05, 2021 by Charles Morris

Tesla’s first vehicle, the Roadster, was produced from 2008 to 2011. The company sold around 2,500 of them, at prices ranging from $109,000 to $170,000. The revolutionary Roadster was intended from the beginning as a sort of transitional vehicle, so it’s no surprise that once Model S, a more practical model with much wider appeal, starting grabbing the headlines, interest in the Roadster waned. After production ended, resale values gradually slumped. According to Phoenix-based Gruber Motors, as of last fall, you could buy a used Roadster for around $40,000.

Gruber calls itself “the first commercial independent Tesla service organization providing engineering and aftermarket support.” The company services all Tesla models, and after years of repairing and upgrading Roadsters, the Gruber team probably know as much about these vehicles as anyone outside of Tesla itself. Gruber’s YouTube channel offers a wealth of information on Tesla servicing, aftermarket improvements and one-of-a-kind custom Tesla vehicles. Once Gruber had this historic vehicle on the lift, “we realized of the 100+ Roadsters we have serviced, this is the absolute cleanest one we have ever seen, inside, outside, and in all the normally hidden areas like the battery cavity.  The car has never seen rain, is stored in a temperature-controlled environment, and as a result, looks exactly like the day it came off the assembly line.”

The pristine condition of this 10-year-old car (which has a mere 2,800 miles on the odometer) is amazing. Typical trouble spots such as the wheel wells, mud flaps and front and rear underbody clips, which typically show scratches and road grime, are like new.

Once the photos of this cherry got around, the owner started getting offers, and decided to put it up for sale. It can be yours for a mere $1.5 million.