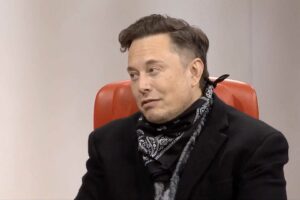 Tesla CEO Elon Musk hasn’t forgotten about the August summit on EVs at the White House where the company he runs wasn’t invited even though GM, Ford and Stellantis were.

Speaking with NYT’s Kara Swisher at a Code Conference panel discussion in Beverly Hills on Tuesday, Musk said the Biden administration was not the friendliest towards Tesla and that labor unions appeared to control its policy.

“Biden held this EV summit. Didn’t invite Tesla. They invited GM, Ford, Chrysler and UAW. EV summit at the White House didn’t mention Tesla once and praised GM and Ford for leading the EV revolution. Does this sound maybe a little biased? It’s not the friendliest administration, seems to be controlled by unions.”

At the August event, US President Joe Biden signed a non-binding executive order to make half of all new vehicles sold in 2030 electrified. He was joined on the White House lawn by top executives of General Motors, Ford, and Stellantis, along with United Auto Workers (UAW) president Ray Curry.

Asked at the time whether Tesla wasn’t invited at the event because its workers are not unionized, White House press secretary Jen Psaki noted that attendees included “the three largest employers of the United Auto Workers. I’ll let you draw your own conclusion.”

Earlier this month, Democrats in the US House of Representatives have proposed that union-made, US-built EVs are given an additional $4,500 tax incentive. Tesla, Toyota and Honda strongly criticized this proposal, which would boost the maximum tax credit to $12,500 from the current $7,500, but only for EVs made at unionized US plants.

Understandably, Elon Musk was quite vocal about this on Twitter, and his frustration was arguably more justified in this case than about Tesla not being invited to the White House executive order signing ceremony.

“This is written by Ford/UAW lobbyists, as they make their electric car in Mexico. Not obvious how this serves American taxpayers.

See what else Musk had to say at the CodeCon 2021 panel discussion about the Biden administration and various other topics in the video above.