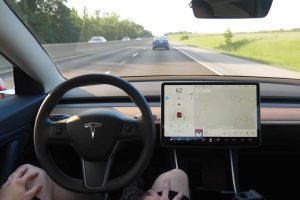 Of course, the user will have to approve the warnings and agree to drive safely.

As we recently reported, Tesla just launched Full Self-Driving Beta update 8.2. CEO Elon Musk said 8.3 is coming soon, and he talked about update 9, and the potential for rolling the feature out to the public.

After those tidbits of information, it seems things changed rather quickly. At first, it sounded like Musk was planning to double the number of FSD Beta testers soon, but wait until later (possibly Q2 2021) for a more “public” rollout. However, he then said that due to the high demand from potential beta testers, Tesla will be adding a “Download Beta” button soon.

If you follow the Tesla and Elon Musk crowd on Twitter, as well as the most prominent and vocal FSD Beta testers, you probably saw recent comments from many of them asking new beta testers to drive safely, don’t ruin this for the rest of us, etc. It seems they’re concerned that a hasty rollout could result in issues.

With that said, Whole Mars Catalog (@WholeMarsBlog) took to Twitter to ask Musk exactly how this download button will work. Remember, it wasn’t long ago that Musk mentioned that “availability varies by region due to regulatory approval delays.”

However, as it stands now, it seems like there really isn’t any official regulatory approval related to an upcoming rollout. This is likely due to the fact that Tesla is keeping the Level 2 status of the system, and maintaining that it requires driver support. If it launched the system and told the public that the car can actually drive itself in most situations, regulators would likely engage.

As you can see, based on Musk’s reply, it looks like the “Download Beta” button will be automatic. This means anyone who has paid for the FSD package could get it as soon as their car connects to Wi-Fi.

We have no idea how Tesla plans to manage this. How will it restrict certain people or certain locations from having access? At this point, Musk’s words make it seem as though there won’t be restrictions. However, he does make it clear that people will have to approve warnings and agree to “drive carefully.”

This is a developing story.