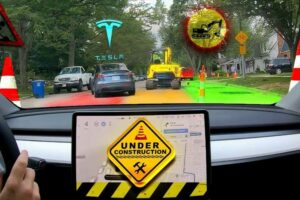 Musk simply shared that “several improvements” are coming via Version 9.1 on Friday at midnight.

Now that Tesla’s Full Self-Driving Beta (FSD) Version 9 has been released to beta testers, it’s time for incremental updates/improvements before it’s ready to be shipped to all capable Tesla cars. Tesla fans and owners waited months for version 9 to arrive, and aside from the official beta testers, they’re going to have to keep waiting.

FSD Beta 9 just launched a few weeks ago, and you’ve probably seen beta testers posting test videos and talking about the tech on social media. While folks seem happy that Tesla finally rolled out V9, there are still improvements to be made, so we have no idea when the FSD download button will appear, or when all paying Tesla FSD customers will get access to the technology in their cars. However, Musk provided the following update in a reply on Twitter:

It seems we can probably anticipate updates and improvements like this indefinitely going forward. Tesla is constantly updating and improving its vehicles via over-the-air software updates, and the primary focus right now appears to be on FSD Beta, which makes perfect sense. Tesla basically refreshed its entire vehicles lineup recently, so now it can hone in on the Full Self-Driving Beta software ahead of anything else.

There have been many delays related to Tesla’s FSD system. Musk has admitted that the process has been much harder than he anticipated. In addition, Tesla decided to remove the radar from its cars in favor of an AI-based pure-vision approach, which seemed to delay the process even further.

If you’ve been following the recent FSD Beta videos, you’re probably aware that the tech seems to have improved significantly, and it arguably works more smoothly than the previous updates. However, as expected, there are still issues, especially related to edge cases.

Check it out for yourself by watching the video below. Then, scroll down and let us know what you think. Also, what’s your estimate on the timing of the wide release of FSD Beta, as well as the download beta button?