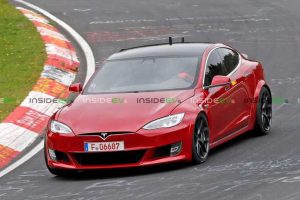 Yes, a low-7-minute Nürburgring run is likely a sure thing, but a sub-7-minute run may be a reality with a factory-spec Model S Plaid.

As we already reported, the recent Joe Rogan Experience podcast interview with Tesla CEO Elon Musk is packed with fascinating information. However, with talk of many products that may arrive far into the future, the Model S Plaid, which is supposed to arrive soon, may be the most interesting.

Musk talked about Tesla’s goals with the Model S Plaid and its upcoming runs at The Nürburgring. First, he reiterated that Tesla will start delivering the Model S with the tri-motor Plaid powertrain this month. Musk also confirmed the car’s 1.96-second zero-to-60-mph time. However, the Model S is a massive car, and it has never been notably agile, so people will be paying close attention to its performance at tracks like The ‘Ring.

Tesla already tested early prototypes of the Model S Plaid at the world-famous track. One of the cars pulled off a run of just 7 minutes and 13 seconds, though it was hand-time and unofficial. In addition, as you can see from the photo above, the early Model S Plaid at The ‘Ring was certainly modified, and not exactly representative of the official vehicle Tesla is now accepting orders for.

Of course, Musk hopes to beat this number, and not just by a little. The CEO said he believes a low-7-minute time is achievable. However, he went further to say that the goal is a sub-7-minute lap time. Musk shared via Teslarati:

Moreover, Musk claimed that a Model S Plaid, direct from the factory with no modifications, could eventually run the Nürburgring lap in fewer than 7 minutes. Officially, only 10 cars have pulled this off. Many of them are smaller and more expensive than the Model S Plaid.

Do you think the Model S Plaid will be able to pull this off? Leave us your insight in the comment section below.