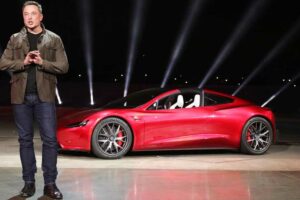 When the history of Elon Musk is officially written, how will he be remembered?

It turns out that Walter Isaacson, who penned the story of Steve Jobs, is working on a biography about Elon Musk. Bloomberg’s Ashlee Vance wrote a fantastic biography on Musk a few years back. Now, Wall Street Journal reporter, Tim Higgins, provides his take in Power Play: Tesla, Elon Musk, And The Bet of The Century.

According to NPR’s Camila Domonoske, “[Higgins] eschews sensationalism for a high-resolution portrait of how exactly an unusual man and an unusual company managed a meteoric rise.” She notes that the book, “focuses less on Musk’s character, and more on the machinations that created his success.” Elon, in turn, responded that the book was “false and boring” on Twitter.

Domonoske, though, says the book is “hardly boring” as it showcases how Musk made so many “herculean efforts” along the way. To that end, “[Elon] believed the world had an unmet appetite for electric cars. He thought a California startup could upend the global auto industry. And time and again, when Tesla’s future seemed doomed, he (quite literally) gambled that the company could pull through, and he won.”

So how did he do it? “Musk had a sharper and more ambitious vision… It went like this: Make that sports car, build buzz and cash, expand enormously to go mass-market, and save the world,” Domonoske writes. “It became his all-consuming mission.”

Nevertheless, “Musk is perpetually multi-minded, juggling SpaceX, solar panels, Tesla, tunnels, flamethrowers… But throughout it all, he relentlessly pushed for Tesla to dominate the market and turn the auto industry on its head. It worked — Tesla has built a best-selling car, and now virtually every major carmaker is planning to pivot to electric vehicles. And the bulk of Higgins’ book explores how, exactly, Musk beat the odds and did the dang thing.”