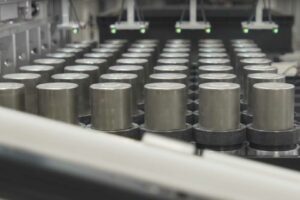 “Certainly if you go like two, three years out, it’s all about total … how many gigawatt hours of battry are produced. That will be the limiting factor. And then going even further down, it’s the supply chain. What is the rate at which battry materials are being mined and refined?”

I had the good fortune to do an email interview with Jordan Giesige. Jordan has been the host of the YouTube channel “The Limiting Factor” for a number of years. Over the years he has become quite knowledgeable about electric vehicles and batteries. He is quoted often and has become the go-to source when it comes to explaining and understanding the complicated world of EV batteries. He is able to simplify the science and make it understandable, even for a layperson like me. And besides, he’s fun to listen to.

InsideEVs: Jordan, please tell us a little about yourself. What is your background (education, etc.)? How did you get started in making YouTube videos?

Jordan: My degree is actually in Management and Organizational Psychology. But, that’s really an accident of history. I was always more interested in science. As far as career, I ran bars and restaurants for several years and then worked in New Zealand’s tax department for about 3 years.

InsideEVs: You recently moved “back” to the United States. What initially motivated you to move to New Zealand and what made it possible for you to move back.

Jordan: I went to a local university, lived with parents, and worked all the way through college to graduate with no debt. I traveled to New Zealand after college to expand my thinking and for an adventure. I stayed because there wasn’t a good reason to leave – great country.

InsideEVs: I want to dive into a topic that you touched on in your interviews with David Lee and Gali Russell, and that you featured in a recent video (1). The topic is the challenge the industry is facing with battery raw materials supplies. It’s a topic that I think deserves more attention.

InsideEVs: We EV enthusiasts excitedly watch the adoption of EVs grow every month and every year. The hockey stick continues to play out. It seems like there is no end in sight.

However, you have pointed out that experts foresee serious battery material supply shortages looming ahead. Do you believe that these shortages could be a limiting factor to EV production in the near term? (Please give us the goods. Please expound about specific materials and specific challenges.)

Jordan: In the near term, no. But that varies hugely based on material. Based on what I’m seeing, in the next year or two, some manufacturers may run into issues, but overall, things will continue at pace.

It’s in the medium and long term where my concern is at. Some raw materials are abundant, others are less abundant. In 3-5 years, even the abundant materials are bottlenecked. The biggest elephant in the room is Nickel at the moment. There were some big hurrahs the last few weeks with VW signing an agreement in Indonesia and rumors of Tesla signing with Vale.

The Nickel from Vale isn’t a new Nickel supply. It’s Nickel that was being used elsewhere in the industry and it’s being redirected to Tesla. That is, it’s kind of robbing Peter to pay Paul.

As for Indonesian Nickel: My understanding is that it’s not environmentally friendly. I think this is why Tesla left it on the table. It could become a PR thorn in VW’s side. Indonesia and the Asia-Pacific have massive amounts of Nickel, but the processes to extract it and refine it tend to be CO2 intensive and toxic.

Where are the hundreds of thousands of tonnes of NEW, responsibly sourced Nickel showing up? We aren’t. We see dribs and drabs here and there, and the potential for some larger resources, but nothing that comes close to meeting demand.

The same is true for most of the other materials. Although there is plenty of Iron and Lithium in the earth for LFP batteries, that’s not the whole story. Most of the story is in the quality of the raw material, the energy required to extract it, the impurity levels, the investment required to bring it to life, the time required to bring the mine to life, and then of course the biggest hurdle: Permitting and politics.

With all that said, it’s not like we’re going to hit a hard cap on raw materials. The materials base will continue to expand, but unless we see changes in regulation and a coordinated national policy push to make it happen, growth of supply will not meet demand.

Tesla is in a better position than most and they can, with their resources, invest and absorb larger parts of the existing material supply chain to feed their growth (like they did with Vale). But, that has limits. I think Tesla needs to get into mining, and there are a number ways they could do that.

InsideEVs: Which battery types or chemistries could be most seriously affected by the material supply shortages? Are there potential chemistries that could be less impacted?

Jordan: All battery chemistries over time because they all use specialized carbon materials at the anode and copper in the electrode foil.

LFP might be less impacted, but as I learn more about that supply chain it has its own issues with sourcing the right type of iron and enough phosphate.

InsideEVs: How many years in the future do you think materials supplies will continue to fall short of EV demand? (On into the next decade?)

InsideEVs: What time frame (or what years) this decade might the shortages be most impactful?

Jordan: It depends on what you mean by impactful. The delta between supply and demand, or the impact on the environment? The former: Later this decade. The latter: Mid-2020s.

InsideEVs: I’ve made a guess that Tesla may deliver at least 2.3 million vehicles in 2023. In light of the raw material shortages, is this an unrealistic number?

Jordan: As above, Tesla is in a better position than most. No, it’s not unrealistic. I’m expecting about the same.

InsideEVs: Tesla has been involved in battery materials supply for years. The staff responsible is most certainly well acquainted with the situation. In your opinion, how likely is it that Tesla’s knowledge of the raw material shortages has had or will have an impact on its decisions to build new factories? In other words, why build a new factory if you can’t supply it with materials?

Jordan: I think you’ve answered your own question here. But, I think Tesla has a good materials runway and I’m betting we’ll hear one or two factories announced in the next year or two.

InsideEVs: From what you’ve studied and heard which automotive companies besides Tesla will be best suited to pull through the shortage period (if any)? Do you have an idea which companies may feel the pain the most?

Jordan: All companies will feel the pain. Even Tesla. They’ve always been cell constrained, with last year and this year as an exception (chips). The limiting factor has simply shifted to materials rather than cell production.

Relatively speaking: Chinese companies are in a great position and so is Tesla. VW appears to be in a reasonably good position. GM and Ford are making moves, but not convincing enough for me.

InsideEVs: You’ve talked in the past about the long lead times that are inherent when it comes to increasing raw materials output. For those not familiar, please talk about this. Is there any foreseeable workaround that could shorten these lead times and or soften the impact of the shortages?

Jordan: Permitting. It’s all about permitting and politics (NIMBYism). The capital is out there and the talent is out there. All the production and build-out aspects can be accelerated.

InsideEVs: What is your opinion of employing range-extended BEVs (aka series hybrids) as a multiplier to help mitigate battery supply shortages?

Jordan: If this is in reference to hybrids, I think it’s wasteful to put two powertrains in the same vehicle from a materials perspective. To me, it seems better to make smaller vehicles like Arcimoto is doing (most cars only ever have one or two people in them).

InsideEVs: I have two questions on slightly different topics.

I know that you are a Tesla shareholder and as such you have a vested interest in the company. In your view, how long do you think it may take (months/years) for the savings from LFP batteries and 4680 batteries to show up as a significant benefit to Tesla’s bottom line?

Jordan: Swapping is one of those things where there is a small group of passionate people that love it because of their unique requirements, but in practice, it’s fraught and inefficient on a mass scale. That’s my opinion of course.

It requires a hell of a lot of infrastructure and engineering that could be better applied elsewhere.  Look at how long it’s taken Tesla to build out their supercharger network. Now take the amount of manpower, materials, and logistics and increase it by an order of magnitude. Better to invest in more charging stations, faster charging stations, and faster charging batteries. It’s easier to move electricity than batteries.

InsideEVs: Thank you so much for taking the time to share your insights and views. Is there anything else you’d like to let readers know about and how can they find you?