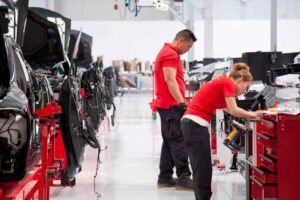 A former Tesla contract worker who had been awarded $137 million in damages over racial abuse last October now has to decide whether he’ll accept or reject a reduced $15 million award.

On June 7, a federal judge gave Owen Diaz, a black former elevator operator at Tesla’s Fremont factory in California, two weeks to decide whether to accept $15 million, far below what a jury had awarded last year.

The reduced award includes $1.5 million of compensatory damages and $13.5 million of punitive damages. According to Reuters, US Districk Judge William Orrick from San Francisco said Owen Diaz identified no “controlling question of law” to justify an immediate appeal of the reduced damages.

A federal jury in San Francisco had awarded Diaz $6.9 million of compensatory damages and $130 million of punitive damages in October 2021, but the federal judge reduced both on April 13; he also rejected Tesla’s bid for a new trial.

William Orrick said in the June 7 order that he was “firmly convinced” that the jury award was excessive, adding that allowing a quick appeal “would further delay resolution of a case that is already five years old.“

Owen Diaz’s lawyers haven’t commented on the judge’s order yet, but they previously said that a question of law concerning damages for emotional distress justified an immediate appeal.

The former Tesla contract worker alleged that he was subjected to a hostile work environment by colleagues and a supervisor at the Fremont plant in 2015 and 2016.

Diaz said that he had to deal with racial slurs, caricatures and swastikas in his nine months working at Tesla’s factory in Fremont, California in 2015 and 2016. During the trial, he said that he faced “daily racist epithets,” including the “n-word,” and saw swastikas and racist graffiti and drawings around the plant. He added that supervisors failed to stop the abuse.

Back in October 2021, Tesla called the initial verdict not justified and said that when Diaz complained about harassment, the company took action by firing two abusive contractors and suspending a third.