Rivian promised to lower prices for its electric pickup truck and SUV following Tesla’s announcement of Cybertruck pricing (and with no production-ready Cybertruck in sight), but there’s been much speculation over just where Rivian’s truck would land price-wise. The EV start-up has now made public how much its first models will cost, ahead of the announced start of shipping to customers in summer, 2021.

True to industry trends there will be a Launch Edition of the R1T pickup model that starts shipping next June. This version of the pickup truck offers the off-road upgrade package featuring a reinforced underbody shield, an air compressor and dual front bumper hooks. The Launch Edition also features heated and ventilated seats, a powered tonneau cover, recycled microfiber headliner, 20-inch all-terrain or 22-inch Sport wheels, Rivian Elevation 360-degree audio and perforated vegan leather seating with patterned stitching. The Launch Edition also get its own unique badging, as you’d expect, as well as compass yellow interior accents and Chilewich floor mats. A special Launch Green exterior color will also be offered on this model.

“The first Electric Adventure Vehicles on the road will be our Launch Edition — a special release of the R1T and R1S available in 2021. For preorder holders interested in Launch Edition, it’s important to visit the configurator early to reserve one since supply will be limited,” Rivian notes. 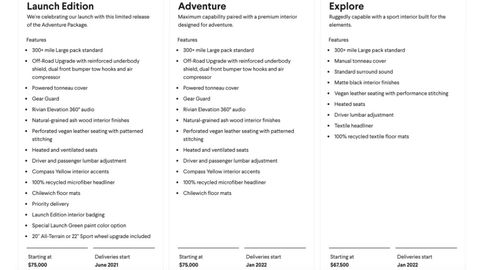 The R1T Launch Edition has Rivian’s Large battery pack, offering 300+ miles, though the EPA rating is still perhaps a few months away, and will start at $75,000 before any federal or local incentives. Rivian advises reservation holders to order this model early, as soon as the official configurator comes online on November 16.

Rivian will also offer its pickup in Adventure trim with deliveries starting in January, 2022. This trim will be priced identically to the Launch Edition, and also offer the off-road upgrade package, but skips the badging and the exclusive Launch Green color options. It also won’t include the upgraded wheel options in its regular list of standard items. Buyers who opt for this version will also have to wait a little longer.

The third trim level for the pickup is the least expensive, dubbed Explore, and while the battery pack will be identical to the other two it skips the off-road goodies and upgraded sound system, among a few other options. This trim level starts at $67,500 before incentives, and will begin shipping to customers in January, 2022. 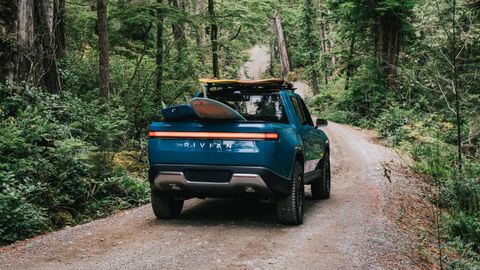 Alongside pickup truck pricing Rivian also unveiled trim pricing for the R1S sport utility, which will be very similar to the truck. However, the SUV Launch Edition won’t get to the first buyers before August next year, while the Adventure and Explore trims follow in January 2022. Pricing for the SUV will be a little north of the truck, with Launch Edition and Adventure trims starting at $77,500 each, while the least expensive SUV in Explore trim starts at $70,000.

Will Rivian hit the bullseye with this pricing ladder?

For now the start-up doesn’t have all that many direct competitors on the market when it comes to trucks, though a pretty large number will materialize over the next two and a half years. Rivian does have some competition from other electric SUVs, specifically from Tesla, Audi and Jaguar, as well as Hummer about a year from now, but for now they all occupy different niches and their pricing varies quite a bit.

However, it won’t be lost on EV shoppers that Rivian’s offerings are toward the higher end of the price spectrum, especially when smaller offerings from Volkswagen and Nissan land on dealership shelves. A $77,000 starting price for an SUV, whether gasoline or electric, is still a lot of money for many new car buyers.

Pikes Peak isn’t America’s tallest mountain, but it is, without a doubt, its most famous. Hundreds of thousands flock each […]

END_OF_DOCUMENT_TOKEN_TO_BE_REPLACED

END_OF_DOCUMENT_TOKEN_TO_BE_REPLACED
We and our partners use cookies on this site to improve our service, perform analytics, personalize advertising, measure advertising performance, and remember website preferences.Ok