Here\u2019s Why the Tesla Semi Will Be Delayed 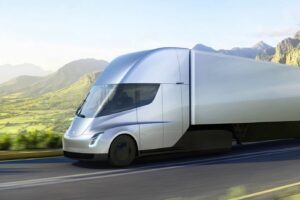 It’s been a while since we last heard about the Tesla Semi, planned to be the automaker’s first model not aimed at private owners, and certainly among the first-announced battery-electric models in its weight class. In fact, the Semi was first shown all the way back in late 2017—a different time in the EV industry, one might say—powered by four electric motors borrowed from the Model 3. The truck promised 0 to 60 launch times in five seconds and a 500-mile range, later quoted as 621 miles. The Semi also promised recharge speeds capable of juicing up the truck with 400 miles of range in just 30 minutes, via a Megacharger. The upright but sleek cabin, with cD of just 0.36, also featured a central seating position for the driver and no exterior mirrors—two items prompting more than a little skepticism from real-life truckers at the time.

Updates on the Semi had been more infrequent than usual from Tesla, perhaps understandable since Model S owners aren’t exactly saving up for one, with prototype trucks continuing to make appearances around Fremont as Tesla readied a separate facility in Nevada to produce the trucks themselves.

If you’ve been keeping track of Tesla’s Semi truck timeline, it was initially scheduled to enter production in 2019, but had been delayed several times, with the last mention occurring in June, 2020 in an email to employees from Elon Musk claiming it has been “in limited production so far.” He offered no evidence for this claim. The email’s main theme, however, was that it was time to bring the model to volume production, but offered no concrete target date. An additional company filing in 2020 aimed for starting deliveries in 2021, which have now been pushed back, as of this week to 2022.

The Semi finally received an official update this week.

“We believe we remain on track to build our first Model Y vehicles in Berlin and Austin in 2021,” the automaker said in an SEC filing this week. “The pace of the respective production ramps will be influenced by the successful introduction of many new product and manufacturing technologies, ongoing supply-chain related challenges and regional permitting. To better focus on these factories, and due to the limited availability of battery cells and global supply chain challenges, we have shifted the launch of the Semi truck program to 2022. We are also making progress on the industrialization of Cybertruck, which is currently planned for Austin production subsequent to Model Y.”

In announcing the Semi truck delay, Tesla also shed some light on a related issue that applies to its passenger models, which had been slated to receive the more advanced 4680 cells. The cells, first shown in September last year during the company’s Battery Day, were headed for the Tesla Model S Plaid Plus, until that version of the sedan was abruptly cancelled earlier this summer. The new tabless design, designed to be part of a structural battery pack, was promised to deliver a serious improvement in range while being half as expensive to produce and lighter overall.

“We have successfully validated performance and lifetime of our 4680 cells produced at our Kato facility in California,” the company said in the same statement. “We are nearing the end of manufacturing validation at Kato: field quality and yield are at viable levels and our focus is now on improving the 10% of manufacturing processes that currently bottleneck production output. While substantial progress has been made, we still have work ahead of us before we can achieve volume production. Internal crash testing of our structural pack architecture with a single-piece front casting has been successful.”

Tesla had been expected to announce that some progress had been made with the 4680 cells without giving a firmer timeline for their mass production, so this week’s statement perhaps didn’t alter expectations regarding the cells too much. But Tesla doesn’t quite have the lead it once did when it comes to battery-electric class 8 trucks, and the 4680 cell issue has become a strangely high-priority item for stock market analysts.

If there is an even greater bottleneck issue for Tesla at the moment, it’s finishing the Berlin-Brandenburg and Austin plants. Without those plants, one of which had become mired in permitting issues that Tesla referenced earlier this summer, the issue of 4680 cell readiness is perhaps secondary.

When do you think the Tesla semi truck will actually hit the road? Let us know in the comments.