Mercedes EQB Electric Three-Row SUV Is on Its Way 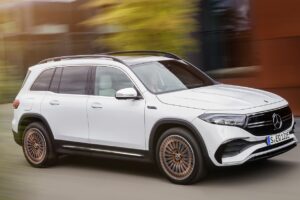 Mercedes brought the EQB electric sport utility to the Munich IAA this week for its European debut, showcasing the brand’s rapidly growing electric SUV lineup. First shown earlier this year in Shanghai, the EQB will offer room for as many as seven passengers when it goes on sale, while also serving up a range of 260 miles in the WLTP cycle. With an all-wheel-drive model to debut ahead of a front-wheel-drive version as well as a longer-range variant, the EQB is set to follow the EQC and EQA electric SUVs that are either already on sale or are on their way into production, with Mercedes expected to quickly surpass Tesla’s lineup in variety. And the EQB is headed here early next year.

“With the new EQB we have designed an iconic electric SUV which incorporates the box forms of our off-roaders and projects them into the future. Its significant silhouette is combined with futuristic elements such as the black panel front to create the extraordinary look of this vehicle,” said Gorden Wagener, chief design officer of the Daimler Group.

Like its larger and smaller siblings, the EQB is based on a corresponding internal-combustion model; in this case the GLB-Class, itself a relatively recent addition to Mercedes’ lineup, offering the interior accommodations and utility of the GLC-Class without some of the luxuries. A more spartan SUV than its pricier siblings, the GLB-Class had arrived to serve up cargo room and passenger capacity to those who may long for an E-Class wagon, but prefer the higher seating position. 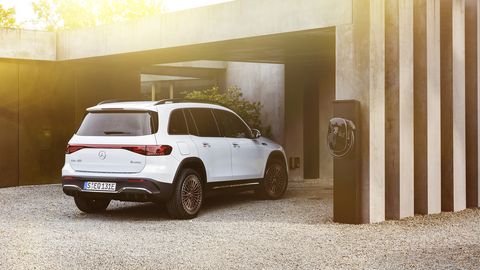 The EQB takes this formula electric, with the EQB 300 4Matic slated to serve up 225 hp, while the EQB 350 4Matic will offer 288 hp along with an identical range, courtesy of a 66.5-kWh battery. Mercedes says that with DC fast-charging at 100 kW, the EQB will be able to juice up from 10% to 80% state of charge in 32 minutes, which won’t set any records but should be adequate.

It remains to be seen whether this electric model’s EPA range will land in a certain sweet spot that will make the EQB attractive among a growing list of stateside competitors, some of which serve up quite a bit more range at the moment. Its promised 260 miles in the WLTP cycle won’t set any range records for its class, at least not until a longer-range variant arrives, while the interior accommodations will land it in among a thick crowd of other hopefuls, some of which will certainly be lower priced. It certainly helps that the EQB will not go the already tiresome fastback route, instead offering a genuinely useful cargo compartment that will be enough to fit two 5’4″ humans in the optional third row.

With the EQB Mercedes will also experiment with a more important concept of getting its buyers into electric models to begin with. This is why the EQB and its new electric siblings are staying so close to the formulas of their internal combustion twins—to allow buyers to cross-shop the two different drivetrains more easily, now that pricing is becoming vaguely comparable. 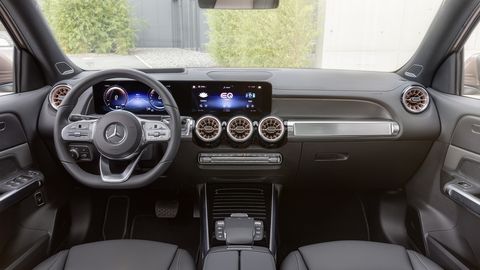 “The EQB is clearly more ‘grown-up’ and has a distinct character of its own,” said Product Manager Marius Philipp. “It is edgier, more angular and at the same time offers more utility and functionality. In terms of the efficient electric drive, it is of course closely related to the EQA, and it also has characteristic Mercedes-EQ design features such as the black panel front. And, as members of the successful Mercedes-Benz compact car family, the EQA and EQB also share many strengths, such as the advanced driving assistance systems and the intuitively operated MBUX (Mercedes-Benz User Experience) infotainment system.”

The boxy electric SUV will also try to make electric Mercedes SUVs more commonplace, after the automaker canceled the launch of the EQC stateside three years prior, citing a greater demand for the model in Europe. It’s safe to say that Europe is in the midst of an EV boom at the moment; whether this EV boom will extend to the US anytime soon is still up in the air, as a wave of EVs in multiple segments appears on the horizon.

Production of the electric SUV will start this month in Turkey, with the first examples due stateside in the first quarter of 2022. Pricing will be announced closer to the EQB’s commercial launch, but it’s safe to say that it’s best to budget around $50,000 for the base version, before options and before any EV incentives.