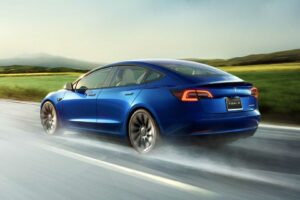 Posted on EVANNEX on December 15, 2021, by Charles Morris

Range, range, range! That’s what prospective EV buyers tend to focus on—but the EV with the longest range is not necessarily the best. If your goal in going electric is to save money and help to reduce air pollution, you’d do better to focus on a different number: efficiency.

There’s a lot of information about the efficiency and emissions levels (which are closely related) of different models at fueleconomy.gov, and at Carbon Counter. The EPA assigns MPGe ratings to EVs to indicate their efficiency. Several countries rate (and tax) vehicles based on emissions classes.

Now the British EV media outlet, Electrifying, has joined the conversation with its new E-Rating, which assigns letter grades to EVs based on their energy usage characteristics. Electrifying ranks vehicles from A++ to E, based on efficiency, charging speed and available efficiency-enhancing features.

Efficiency is a scientific term, which is defined for automotive purposes as the amount of energy a vehicle consumes in order to travel a given distance. Electrifying refers to its letter grades as “efficiency ratings,” but it’s understood that they also take some other related factors into account.

Electrifying’s letter grades are “formulated using an algorithm that takes into account a number of factors, including how well the car converts electrical power into miles on the road [efficiency], the speed at which the battery can be recharged [which has nothing to do with efficiency per se] and features such as energy-saving heat pumps, intelligent brake recuperation and climate control preconditioning. There’s also a ‘secret sauce’ based on our expert team’s experience of driving, testing and reviewing electric cars in the real world.”

How much does efficiency matter? Electrifying estimates that UK drivers of the most efficient EV models will save more than £500 a year in charging costs compared with owners of the least efficient ones.

Which are the best-performing models on the UK market? Electrifying rated the Tesla Model 3 and the upcoming BMW i4 (which recently went on sale in Europe) as the most efficient cars currently on sale—both achieved an A++ rating.

Some 13 models, including the Mercedes EQS, Citroen Ami and e-C4, and SEAT Mii, earned an A+ rating, and 12 more were each awarded an A. Larger vehicles tend to be less efficient, and at the lower end of the scale we find the Audi e-tron and Mercedes EQC luxury SUVs, which each got a D, and the Mercedes EQV van, which was the only vehicle to be given an E, the lowest possible rating.

“As electricity costs less than petrol or diesel, it is easy to dismiss the efficiency of electric cars and think it isn’t important. But the costs of a less efficient model can soon add up,” said Ginny Buckley, founder of Electrifying. “Perhaps more importantly, an electric car that is more frugal will go further and spend less time charging, meaning greater convenience for consumers.”