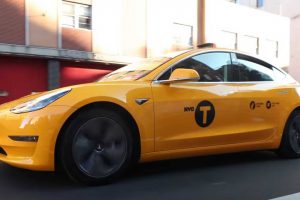 Sadly, the Tesla Model 3 yellow taxi was only in service for a few months.

A little over a month ago, in December, we shared a few stories here about the first Tesla Model 3 taxi cab in New York City. It first went into service in November 2020. According to Drive Tesla Canada, the cab driver’s name is Rami, and he was overjoyed to drive his dream car as a New York City taxi cab. He had previously used a Toyota Camry and Toyota Sienna minivan for his taxi service.

However, a very sad event has forced Rami to take the Tesla out of service, at least temporarily. It was involved in an accident on the Long Island Expressway. The accident appears to have been relatively minor, and reportedly, no one was hurt. However, as you can see, there’s a good amount of damage all along the driver’s side, but the worst of it is at the rear, where an entire piece of the Model 3 is outright missing.

For those who haven’t seen the New York City Tesla Model 3 yellow taxi cab, check out the video below.

At this point, there are few details related to the Model 3 taxi crash. Will it be repairable? There’s no way to know for sure, but it seems likely that it will be back in service, eventually. Unfortunately, in the meantime, Rami obviously won’t be driving the Model 3.

After the accident, the Model 3 wasn’t drivable. It had to be towed to a nearby garage. This is a developing story. If more details become available, we’ll update this article.