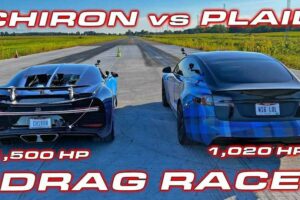 Well, buckle up because the guys over at DragTimes have managed to put them side by side on the drag strip for a fascinating battle of past versus future.

Come to think about it, these two vehicles could not be more different. One is powered by an 8.0-liter W16 quad-turbocharged gasoline engine, the other by a tri-motor electric powertrain.

One is a $3.6 million exotic two-seat coupe with a production run limited to 500 units worldwide, while the other is a four-door sedan that costs just $140,500 and is being built in as many units as Tesla can sell.

One is a handcrafted, high-quality product offering incredible personalization, while the other is a mass-produced vehicle with a build quality trailing premium brands and not that many customization options.

We could go on listing the differences, but you get the point. Now, there are also similarities between the Bugatti and the Tesla. One is the phenomenal acceleration they deliver—0-62 mph in 2.4 seconds for the Chiron and around 2 seconds for the Plaid—thanks in part to the fact that both are all-wheel drive, and the other is the curb weight.

Despite having a carbon fiber body, the incredibly complex Chiron weighs 4,398 pounds (1,995 kilograms), making it almost as heavy as the Tesla Model S Plaid, which tips the scales at 4,766 pounds (2,161 kilograms). On paper, the power and weight advantage the Chiron has over the Model S Plaid should help it win, but as we learned after watching countless drag races with the Plaid, you can never dismiss it.

The two cars covered a total of three quarter-mile runs with a standing start and two rolling start races to find a winner, and as you can imagine, they were really close—especially after the first run when the guys realized that the fresh tarmac was not sticky enough, leading them to start from the other end of the track. Time to place your bets.