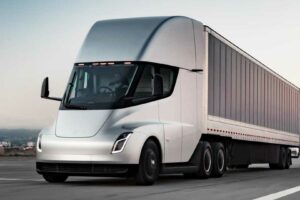 Not long ago, PepsiCo announced that it would be getting its first Tesla Semi trucks during the fourth quarter of 2021. At this point, it looks like the company’s first all-electric haulers may be delivered in December. However, PepsiCo will need somewhere to charge them, and it would be wise to get that into place before the electric semi-trucks arrive.

Now, according to a report published by Teslarati, PepsiCo. already has the official permit for the installation of a Tesla Megacharger, which is basically an adaptation of Tesla’s Supercharger that can and will be used to charge the Tesla Semi.

The details came from public documents via the Stanislaus County Planning Commission in California. According to the documents, the permit for the installation of the Tesla Megacharger was granted on November 22, 2021. However, it has already been a long road for PepsiCo, as the company originally processed the application way back in April 2021.

The county’s planning commission has gone through a process of inspections over the last several months to assure that the plans are safe and up to code. We’ve been through a similar process of permitting with the township and utilities related to a solar panel and battery backup install, and we can tell you that it seemed as though it would never be officially approved.

If everything goes as planned, PepsiCo stands to be the first company to take delivery of the Tesla Semi, and now, it may actually be able to put it into service shortly thereafter.

That said, this won’t be the first Tesla Megacharger deployed, though it appears it will be the first outside of Tesla itself. The automaker recently installed a Megacharger at its Gigafactory in Sparks, Nevada.

While it seems PepsiCo may actually get its first Semis before the close of 2021, Tesla doesn’t have plans to begin full-scale production of the electric hauler. Tesla CEO Elon Musk noted that cell constraint issues must be solved before “ramping Semi to significant volume.” He also said there’s nothing else holding up the Semi.