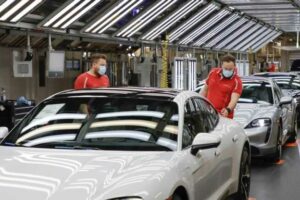 As part of its goal to become CO2-neutral across its entire value chain by 2030, Porsche is calling on suppliers to use renewable energy in the manufacture of components for its cars. Specifically, Porsche wants some 1300 suppliers to use renewable energy in any work that provides production material for new vehicle projects, and those who are unwilling to do so will not be considered for contracts with the automaker in the future.

The motivation for the mandate comes from a trend the automaker has noticed: Porsche’s current supply chain currently represents 20% of the automaker’s total greenhouse gas emissions. However, that figure is expected to double to about 40% by 2030, as a result of the ongoing electrification of vehicles, the automaker notes.

The issue of carbon neutrality across the supply chain is something that’s only come into view relatively recently, even though a number of automakers have made it a priority to become less dependent on polluting parts and energy production methods. When it comes to car factories, the reality is that the most modern ones in Europe are already quite clean because they’re just essentially large warehouses where shipped components are assembled into cars—the manufacture of parts takes place elsewhere, from thousands of suppliers that ship from all over the world. Achieving carbon neutrality is a relatively straightforward goal for the assembly plant.

Where it gets far more complicated is the manufacture of components by those thousands of suppliers, as there is only so much oversight that automakers really have over suppliers.

“Our battery cell suppliers have already had to use green energy since 2020,” said says Uwe-Karsten Städter, member of the executive board for procurement at Porsche AG. “And now we are taking the next important step: we stipulate that our series suppliers also use only renewable energy to produce our components, to help reduce CO2-emissions even further. We recognize that we have a responsibility to ensure that supply chains are transparent and sustainable.”

The next step, however, involves cracking the contract whip at all the suppliers to combat the trend of their relative predicted share growth of emissions, compared to the automaker itself.

“By using only renewable energy sources, our suppliers are following our example in our efforts to reach CO2-neutrality,” Städter adds. “We plan to have even more intensive talks with our partners in order to drive forward improvements in our sustainability. It is only by working together that we will be able to combat ongoing climate change.”

Porsche isn’t alone in seeking to reduce its carbon emissions; Volvo has recently achieved climate-neutral status at its Torslanda plant, which is its oldest production site in Sweden. The plant switched to climate-neutral electricity sources in 2008, and has recently made other improvements that have tweaked the plant’s reliance toward cleaner heat sources. Climate neutrality is more difficult to achieve than carbon neutrality, and Volvo’s first plant to achieve this was the Skövde engine plant, and only in 2018. So in the drive to lessen a site’s environmental footprint, there are many actions that have to be taken to achieve different levels of emission ratings.