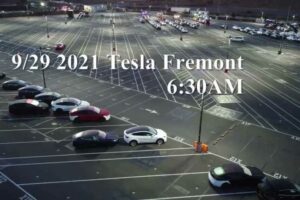 Several refreshed Tesla Model X electric vehicles have been spotted in the delivery area of the company’s Fremont plant in California on September 29.

The flyover video shared by Sawyer Merritt fuels expectations that full-scale production of the Model X Plaid and Model X Long Range could start this quarter. That’s especially because these new crossovers were spotted in a lot that Tesla generally uses for shipping to delivery centers. As a result, approval for deliveries shouldn’t be too far off.

For now, it is unclear where these vehicles are headed, but the fact they were spotted proves that Tesla is making progress with the rollout of the refreshed Model X. Looking closer at the electric crossovers featured in the video, they are covered with protective wraps, which means they are not likely to be release candidates.

When Tesla unveiled the refreshed Model S and Model X earlier this year, it planned to start production of the sedan first, followed by customer deliveries, and then focus on the Model X in the third quarter.

Obviously, things didn’t go as planned as Q3 just ended and no reports of buyers taking delivery of their refreshed Model X crossovers have surfaced so far. Tesla’s current target is to start Model X Plaid deliveries by January to February next year, which means volume production should begin sometime during the fourth quarter 2021.

Needless to say, when Tesla finally starts producing refreshed Model X units for customers, it will have a long backlog of orders seeing as it hasn’t built a Model X in almost a year.

For US buyers who place new orders for the flagship electric crossover now, Tesla estimates delivery in May–June 2022 for both the Model X Plaid and Model X Long Range. The previous delivery timelines for new orders were March–April 2022.

The refreshed Model X Plaid is expected to be the first to reach customers with an MSRP of $119,990 before options and incentives. This variant will go from zero to 60 mph (96 km/h) in just 2.5 seconds thanks to the new tri-motor powertrain and is expected to get an EPA range of 340 miles (547 km).

As for the Model X Long Range, it will come with a dual motor powertrain and 360 miles on a single charge for a $99,990 starting price.