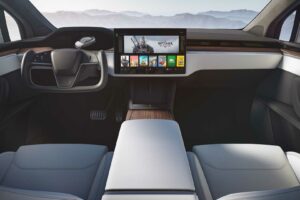 Interestingly, the new Model X has no license plate.

It seems Tesla must be out testing the refreshed Model X. As you can see from the video in the tweet below, a new Model X was seen driving on 101 near Sunnyvale, California, which isn’t too far from Tesla’s main factory in Fremont.

If you check Tesla’s official website right now, it notes that the all-new 2021 Tesla Model X Long Range and Model X Plaid have an estimated delivery time of January to February of 2022, so it’s going to be a while.

The video of the new Model X was captured by Wilson Lam:

Since the Model X is moving down the highway, and it never comes to a stop, at least in the shared video clip, it’s hard to make out details. However, we do see that there’s no license plate, the wheels are easy to see, and at a point, you can sort of see inside the Model X.

Watch the short video and look through the Model X’s driver’s side window. It’s clear there’s no steering wheel. If there was, you’d see the top of the standard steering wheel. This doesn’t mean the Model X doesn’t have a steering system at all, but instead, it clearly has a yoke like the Model S Plaid and Long Range.

You can also see the new touchscreen pretty clearly, and it sits in landscape orientation. If this was an earlier Model X, it would have the horizontal touchscreen on the center console, which wouldn’t likely be visible as you were passing by.

Do you think Elon Musk hopes to launch the refreshed Model X ahead of schedule? Will it be delayed even further? Let us know your predictions in the comment section below.