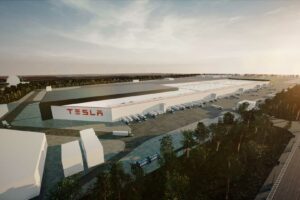 The Tesla Giga Shanghai plant in China has suspended production of electric cars for several days, but it might not be the end of COVID-19-related lockdown disruption.

The plant was expected to halt production for four days – between March 28 to March 31 – and return online on April 1, but according to Reuters‘ sources, the suspension of production will be extended.

“Tesla is extending a production halt at its Shanghai factory, an internal notice seen by Reuters showed.”

In other words, Tesla might not be able to resume production until the situation normalizes in the area.

That would add on top of the supply issue, which already causes long queues of customers waiting for cars as demand far exceeds supply.

Assuming that a single day of production at the Tesla Giga Shanghai is worth 2,000 or so cars (Model 3 or Model Y), several days could easily reduce the year’s output by up to around 10,000.

Monthly production at the plant exceeded 50,000 units multiple times, so as long as the halt does not extend into weeks, the plant should remain Tesla’s biggest production site globally. During the six-month period, which ended on February 28, the company sold in China or exported more than 350,000 Made-in-China Model 3 and Model Y.

Below we can see a flyover video of the Tesla Gigafactory 3, recorded by Jason Yang on March 26, which reveals some new auxiliary construction elements adjacent to the main production buildings.