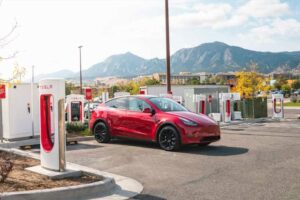 Initially, it might only be the stations built with public funding.

Tesla’s proprietary Supercharging network that so far was exclusively available only for Tesla cars and is one of the biggest assets for the company, might open up to other vehicle brands next year.

The first option is unlikely to happen. It would be silly for Tesla to invest in infrastructure for EVs from other manufacturers because the charging business is challenging to be profitable at.

The second option is also difficult, as other manufacturers don’t want to support Tesla’s network. For sure they don’t want to switch to Tesla’s proprietary charging connector in North America (in Europe, and probably in most of the rest of the world, Tesla at least uses the CCS2-compatible connector now). This leaves space only for some minor players, like Aptera, with a low-volume product (not yet launched on the market).

We can only guess that it’s not in Tesla’s interest to open the network to other large manufacturers and remove its edge on long-distance travel. The compensation for that probably would be too high for other manufacturers (they will stick around until the general infrastructure will mature).

Anyway, nine years since the first Superchargers were installed in 2012, the Tesla Supercharging network is still basically Tesla only. Currently, it counts more than 25,000 stalls globally.

Some Superchargers to be publicly available in 2022

According to the latest reports from Norway and Sweden, Tesla might open some individual stations for all EVs (CCS Combo 2 connectors).

According to Teslarati, the reason for that is public funding for those stations and requirements associated with getting taxpayer money.

We are not sure how it will end, but at least in the case of Norway, a publicly available Supercharger might materialize by the end of September 2022.

The issue associated with opening the network for all EVs is the cost of the system (authentication and payments) and probably new charging software to handle communication with other EVs (it’s not 100% unified, which sometimes causes problems in other networks).

We seriously doubt that it would be worth the hassle and expenses, especially for several stations per country, just to get some subsidies.

Maybe in the end it will be something else – new Supercharging stalls alongside general DC fast chargers of some other network. We’ve seen many stations like that, where at a single site installed chargers from various networks.

Separately, recently German Federal Minister of Transport Andreas Scheuer urged Tesla to make the Supercharging network available to other EVs in Germany. Only the time will tell how it will turn out.