See How A Pickup Truck With Trailer Blocked 7 Tesla Superchargers 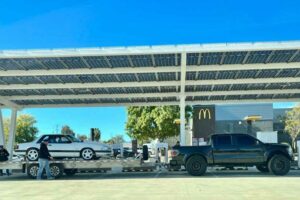 Intentional or non-intentional blocking of charging stalls (aka ICE-ing) happens from time to time, but here is some kind of record-breaking attempt.

A photo shared by The Girl With the Mozart Tattoo @phibetakitten (via Teslarati) shows a large pickup truck with another car on a trailer that has parked across multiple Tesla Supercharging stalls at the Firebaugh site in California.

According to the report, seven Superchargers were ICEd at once, while the three members of the record-breaking team went to have a bite to eat at a nearby McDonald’s. You can’t go hungry when setting new records after all.

The story is more humorous than usual, because the Firebaugh Supercharging station has some 56 stalls total, and at the time it was mostly empty. In other words, probably no one was blocked.

However,  empty or occupied, charging stalls are reserved spaces for charging, and even non-charging EVs are not allowed to park there. Tesla, for reference, would bill a car that is disconnected and doesn’t leave within a few minutes after a charging session ended.

Blocking charging stalls should be stigmatized because it potentially hits drivers who need a recharge, while at the same time, it harms the industry which invests heavily in the charging points.