Tesla 4680 Battery Cells To Debut In Production In Early 2022 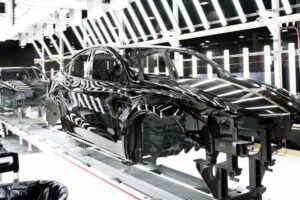 One of the important takeaways from Tesla’s recent third quarter earnings call was an announcement that the 4680 cell would debut in a production vehicle in 2022. They didn’t specify which model it will be used in, but based on previous reports and the information that we’ve been gathering for months on this new type of cell, as well as its inclusion into a structural battery pack, we can draw some conclusions.

During the earnings call, Drew Baglino, the SVP of Tesla Powertrain and Energy Engineering, announced that development and testing on the 4680 cells had gone well and that the company had ramped up the production for these new cells in order to use them for testing purposes, as well as test the manufacturing process itself – Tesla says that so far its testing of the cells are living up to expectations.

The other important bit of information shared by Baglino was regarding the time frame when 4680 cells and structural battery packs would go into production. He said that both these new technologies will debut sometime in the first part of next year, although he didn’t go into details as to which vehicles will get them or where they will be produced.

One hint could lie in Tesla’s announcement that right now it’s really focusing on the Model Y, as well as getting the Cybertruck ready for production. This leads us to believe that the Model Y will be the first to get the structural battery pack, as well as the new 4680 cells.

We also expect the new Model Ys that will roll off the production line in Tesla’s new factories in Texas and Germany to get them both. The time frame all seems to add up, given the fact that both the Austin and Berlin manufacturing locations are expected to come online next year too.