Tesla-Certified Repair Shop Turns Away Cars Thanks To Geico 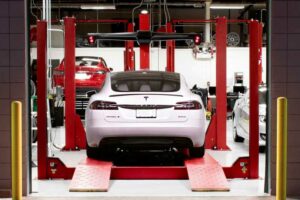 A Tesla owner has reportedly struggled to get his car fixed after a recent accident. Fortunately, the owner is okay, and the accident wasn’t his fault, at least according to the various stories about the matter. However, it seems Geico is unwilling to pay the cost to repair the Tesla, so the Tesla-certified repair shop won’t move forward with the work.

According to Teslarati, based on a story shared by Wham Baam Teslacam, the Tesla owner resides in the Phoenix, Arizona area. The publication claims that there’s not a single Tesla-certified repair shop in Phoenix that will accept Geico customers who are seeking a Tesla collision repair. This seems like yet another reason that Tesla owners may want to look into the company’s own in-house insurance. It’s not available in all areas, but we’ve heard many reports that it’s saving people money, and it is currently available in Arizona.

As the story goes, the Tesla owner has to come up with some $2,100 to cover various expenses, which isn’t cheap, but also doesn’t seem exorbitant. Everything is much more expensive today than it used to be, labor prices are rising, and parts are hard to come by. Regardless, since Geico reportedly won’t cover the cost, Tesla owners in the area have had to resort to paying out of pocket or getting their own insurance to help cover it, even when they’re not at fault.

Wham Baam Teslacam is putting together a video about the situation, which should include further details. Once it’s published, we’ll add it to this story as an update.

As you can see from the original tweet above, the Tesla owner explained to the channel that he must file a claim with his own insurance company and then pay a $2,000 deductible. This would be in hopes that State Farm can force Geico to pay its fair share. However, there’s no way to know for sure if Geico will comply, though it appears the situation is going to be under further review.

We can only imagine that the video and various articles on the story will get Geico’s attention. The insurance company’s service team already replied to the original text, so hopefully, there will be more developments between now and Sunday, when the video will be published on YouTube.

Teslarati contacted Geico, but hadn’t yet received a reply at the time of writing. We’re reaching out to the insurance company as well to see if we can get more details. If you’ve heard any related stories or experienced a similar situation with regard to a Tesla repair, drop us a message in the comment section.