Tesla China Boss Gets Promoted, Is Now No. 2 Executive After Musk 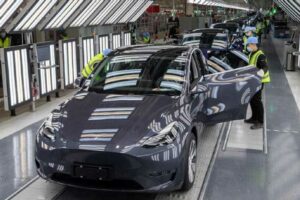 After weeks of speculation, we now know the exact role Tesla’s China boss Tom Zhu will be given within the company’s global operations.

The executive has been reportedly promoted to take direct oversight of Tesla’s US assembly plants as well as sales operations in North America and Europe, according to an internal posting of reporting lines reviewed by Reuters.

Interestingly, the Tesla posting showed that Zhu retains his title of vice president for Greater China as well as his responsibilities as Tesla’s most senior executive for sales in the rest of Asia as of January 3.

The news agency was able to review the organizational chart that had been posted internally by Tesla and confirmed the change with two unnamed sources who had seen it. While he is not (yet) Elon Musk’s direct successor, the move makes Tom Zhu the highest-profile executive at Tesla after the CEO. He will have direct oversight for deliveries in all of the company’s major markets and operations of its key production hubs.

Zhu does not have a direct report at Tesla’s Berlin plant, but a person with knowledge of the matter told Reuters that responsibility for that operation would come with the reporting line for Amsterdam-based Ward.

The reporting lines for Zhu would keep Tesla’s vehicle design and development – both areas where Musk has been heavily involved – separate while creating an apparent deputy to Musk when it comes to managing global sales and production. His appointment to a global role comes at a time when Musk has been criticized for being distracted by his acquisition of Twitter.

Late last year, Tesla brought in a team of executives from its China subsidiary headed by Tom Zhu to troubleshoot production issues in the United States. His promotion comes as Tesla is preparing for the launch of the Cybertruck and a refreshed version of the Model 3.

Under Zhu’s leadership, Tesla’s Shanghai plant saw a strong rebound from Covid lockdowns in China. During Shanghai’s two-month Covid lockdown, Zhu was reportedly among the first batch of employees sleeping in the factory to keep it running.