Home » Electric Cars » Tesla Continues To Take Over Norway, & Now It's Thanks To Model Y

Tesla Continues To Take Over Norway, & Now It's Thanks To Model Y 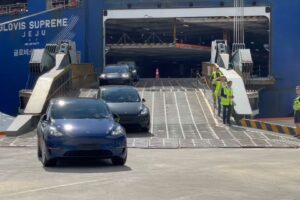 The made-in-China Model Y has arrived in Norway in massive numbers, and the exports have just begun.

Tesla’s recent events in Norway have been groundbreaking. The electric automaker shipped around 1,300 Model Ys to Norway as it began deliveries to Europe recently. It turns out these Model Ys were shipped directly from Gigafactory Shanghai. In turn, all of these are the Tesla’s Made-in-China (MIC) Model Y Long Range variants.

This massive delivery of Model Ys arrived at the Port of Oslo (Oslo Havn) and was first spotted on August 21st. Video footage of the unloading and the fleet parked at the port (see below) documented the day. And there was also another cool video of the Port of Osla shot by an Indian YouTuber (in Hindi language) as the unloading was finishing up.

Now… fast forward to the present: almost a week later, Tesla Model Y has become the number one electric car in Norway. According to Teslarati, “Less than a week since its arrival, the Tesla Model Y sales have topped the charts.” Furthermore, “Tesla’s dominance in Norway is significant because the country is one of the first to report electric car registrations beating ICE car registrations.”

Tesla’s leadership position in key European countries is likely to grow. Development of the Model Y production line at Giga Berlin is also in its final stages. Tesla’s European gigafactory is slated to deliver the Performance variants of the Model Y to European customers as early as later this year (as evidenced in the first-ever video showcasing the inside of Giga Berlin).

Tesla started the Model Y delivery campaign in Europe in a rather non-traditional way. The electric automaker pasted stickers on the sides of Model Y showroom cars which read ‘Not Model Y’. This meme-inspired marketing stunt paid off big time as various spy shots went viral — Tesla quickly got the attention it wanted to boost Model Y brand recognition in the region.

Written by: Iqtidar Ali. An earlier version of this article was originally published by Tesla Oracle. Revised update edited by EVANNEX.