Home » Electric Cars » Tesla Cybertruck Appears To Be CGI In Latest Video, But Is It?

Tesla Cybertruck Appears To Be CGI In Latest Video, But Is It? 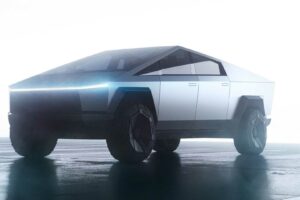 Many brands release CGI videos of upcoming cars, but we know the Tesla Cybertruck is the real deal.

Whenever we see newly unveiled future EVs, it makes us think back to a time when automakers brought crazy concept cars to auto shows with almost no intention of ever producing them. In the electric vehicle space, it seems things are quite different. Some brands are revealing shocking EV concepts with every intention to produce them, and most often, in a form much like that shown at the reveal.

People were certainly shocked when the Tesla Cybertruck took the stage at its unveiling event, so much so that some thought it was a joke. They figured CEO Elon Musk would show off the “real” Cybertruck after the strange beast left the stage.  However, the truck we all saw at the event is pretty much what’s supposed to come to market in the future.

When GMC revealed its Hummer EV, people weren’t likely quite as shocked since it looks similar to the old gas-powered Hummer. However, the videos showcasing its sheer size and capability surely turned heads. It wasn’t long before we learned that most of the early Hummer EV footage was CGI, though GM does have working prototypes now.

Similarly, Rivian has shared some fascinating footage of its R1T electric pickup truck that some folks have assumed is CGI. In some cases, the early footage was computer-generated, however, in other cases, Rivian has confirmed it to be a real video.

While videos and images of the Cyerbtruck may look like they’re computer-generated, that’s usually not the case. Tesla may not have more than one working prototype at this point, but it’s most definitely the real deal, which makes it hard to know if some of the videos are real or CGI.

If you checked out Tesla’s recent 2020 Impact Reports, you may have seen the short clip we’re referring to, though almost any clip of the Cybertruck looks somewhat unreal, as if it’s an alien ship or something that’s being prepped for a movie scene about the future. Tesla shared the short video highlight compilation on its official Instagram page, after which the Cybertruck clip was reshared on Twitter by Austin Tesla Club.

What do you think? Be sure to visit Tesla’s Instagram page to see the whole video. Then, scroll down and leave us a comment below.