Tesla Cybertruck Arrives At Giga Texas Ahead Of Product Roadmap 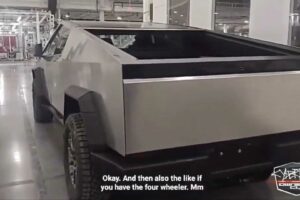 Above, we have a breaking video walkaround from Cybertruck Owners Club of what appears to be the updated Tesla Cybertruck alpha prototype at Giga Austin. Drone videographer Joe Tegtmeyer just revealed footage of the Tesla Cybertruck arriving at the factory, which we’ve embedded at the bottom of the article, and now people are posting videos and images of it at the site.

We’ve seen the Cybertruck at Giga Austin in the past. You may remember, CEO Elon Musk was visiting the factory and he made a speech. The Cybertruck was making its way around the grounds, though it seems it was likely the original Cybertruck that was revealed years ago.

Since then, Tesla has been working on tweaks and updates to the Cybertruck to get it ready for production, which could begin before the end of the year. Over the weekend, the new images of a seemingly updated Cybertruck surfaced, and it became clear from Tegetmeyer’s latest video that the updated alpha prototype has reportedly made its way to the Lone Star state.

According to Tegtmeyer, the Cybertruck is likely part of Tesla’s Q4 2021 and Full Year Earnings Report and Conference Call. Moreover, since Texas is now Tesla’s new headquarters, it would make sense to showcase the Cybertruck at Giga Austin.

As you can see from the video above, as well as the additional clips and images in the tweet replies below, it now seems clear exactly where the Cybertruck alpha prototype was spotted.

There has been a lot of buzz about the Cybertruck of late. This is because of recent reports about another potential delay until 2023. However, we’ll have to wait for details from Musk to know the whole story.

Musk said in the past that he may no longer be participating in Tesla’s earnings calls unless there is important product information to reveal. Will the CEO bring good news or bad on Wednesday, January 26, 2022?

Check out Tegtmeyer’s Giga Texas drone flyover and Cybertruck walkaround video below. It appears the Cybertruck arrives at around the 10:40 mark in the first video: