Tesla Cybertruck Final Design May Be Shown In Q2 2021 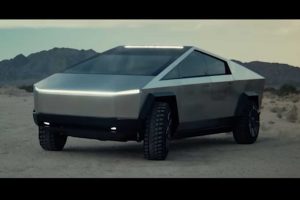 The Cybertruck is slated to go into production at Giga Texas towards the end of 2021 if everything goes as planned.

Tesla Cybertruck, the automotive equivalent of Kim Kardashian’s posterior for its ability to break the internet, was so controversial after its unveiling primarily because of the way it looked. It was a vehicle that created massively polarized opinions, that ranged from ones of admiration for its boldness, to sheer outrage, even though we all expected the design to change before production.

At first, Tesla neither denied nor confirmed information regarding the design changes it was going to make to the Cybertruck before it started rolling off the production line. In late 2020, Elon Musk said that Tesla had finally wrapped up the design work on the electric truck and that it still looked pretty much like the design study that previewed it (with small improvements), only around 3 percent smaller so that it actually fit in regular-sized garages.

In late February, Musk announced that he had seen the final Cybertruck design and that he would be posting some photos of it shortly – we’re already two weeks after the announcement was made, and we still haven’t seen these photos. Now, though, the Tesla CEO is suggesting the company will show the Cybertruck in the second quarter of this year; he also said it’s still on track to enter production in late 2021 (a few examples may even be delivered before the year is over).

Musk also said that it would be built at the new Giga Texas facility and that the company is now focusing on getting the production going as planned.

So what can we expect from the final Cybertruck design? Well, it seems that aside from the final look of the vehicle, we will also be told about some of the features that were only given a passing mention. These should include the bed (which is covered by a solar panel and has additional storage spaces), the seating arrangement, colors and personalization, the front light bar, the transparent roof, the cameras instead of mirrors, the (probably) bulletproof glass among others.