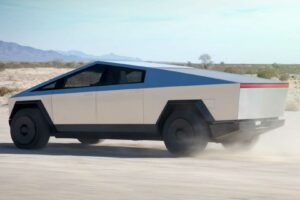 That’s an estimated number in the Tesla Cybertruck Reservation Tracker.

Tesla Cybertruck is one of the most popular electric vehicles ever announced and is still getting tons of reservations (250,000 within a week after the unveiling in November 2019) and attention all over the world.

Teslarati recently noted that, according to the Tesla Cybertruck Reservation Tracker website, the estimated cumulative number of reservations is now above 1 million units (using over 18,800 individual reservations as data points).

That’s a pretty big number, although we must remember a reservation requires only $100 deposits and are examples of double- or even three-digit reservations by some people who are not necessarily willing to even buy those trucks.

In other words, this number does not tell us much, and even Tesla’s Elon Musk expressed his indifference about the number quite some time ago, saying that they stopped counting after a few hundred thousands.

The interest in Tesla Cybertruck is strong, and it appears to be big enough to support the investment in a manufacturing plant in Tesla Giga Austin in Texas (the production might start this year). That’s the main thing that was needed.

The entire topic of 1 million reservations seems to be used to compare Tesla with the most recent Ford F-150 Lightning, which noted 44,500 reservations in 48 hours. Some attack the Ford’s electric pickup saying “RIP Ford F-150 Lightning”, and reporting that Tesla Cybertruck’s reservations accelerated after the unveiling of Ford (we don’t have any data about that). For sure it does not sound EV-friendly to welcome new EV models like that.

It reminds us of the funny video about Ford’s conventional truck and Tesla’s pickup tug of war (released by Tesla), which failed to prove anything.

The most interesting thing about the Tesla Cybertruck Reservation Tracker is not the estimated number of reservations, but rather the estimation of which versions are the most popular:

The low number of single motor versions suggests that Tesla will focus on the top two versions. Also, the number of 74.3% of Full Self Driving option is quite high.