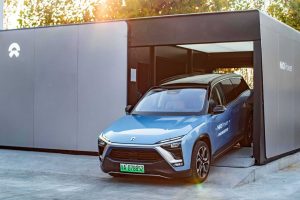 Despite pretty solid rumors coming out of China, Tesla insists it is not considering using battery swapping in the future. NIO has proven that its battery swapping program works well, but Tesla says it is “riddled with problems and not suitable for widescale use.”

According to Teslarati, this all came to the forefront when Tesla Shanghai Co., Ltd. added a “new energy vehicle battery swap facility” to its plans. Regardless of the reason for the latter plans, Tesla has no plans to revisit battery swapping. It didn’t work well for the company in the past, and Tesla is banking on its long-range vehicles and rapid-charging capability.

Various publications and new websites in China recently reported the potential for Tesla’s future battery swapping. However, a Tesla representative spoke with Beijing Business Daily (via BBT News) to clarify that “Tesla will not change the battery.” Tesla also told other sources that charging cars is the best method. It will continue to roll out its Supercharger network. The automaker insists that battery swapping is not the answer, and it has previous experience to prove that.

Meanwhile, NIO launched its swapping program back in 2018. Since then, it has already completed over 1,000,000 swaps at over 200 locations in China. NIO isn’t shying away from the technology. In fact, it says it will have 500 battery swapping stations online by the end of 2021. Check out NIO’s battery swapping process in the video below. Our own Tom Moloughney got to experience it firsthand.

This is all quite interesting since Tesla CEO Elon Musk was a big advocate for battery swapping back in 2013. However, he’s always been willing to admit mistakes. Clearly, he believes he learned something from the experience and isn’t willing to go back down that road.