Tesla Model 3 Gets Crushed With Concrete Blocks, Owner Walks Away 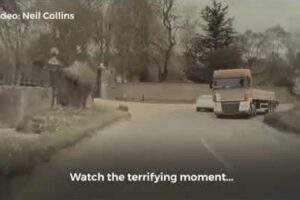 The Model 3’s windshield was destroyed, and the front of the car was crushed, but the occupants were virtually unharmed.

According to a recent report by Teslarati, complete with a video uploaded by Simon Alvarez, a Tesla Model 3 may have saved its owner and his wife from potentially horrible injuries. As always, we can never know for sure what “could have” happened, or how another car “may have” held up. However, we do know that the Model 3 did its job in this case, along with many others, which we’ve shared in the past.

As the story goes, Neil Collins and his wife were driving their Model 3 in England when a large truck transporting many pallets of concrete blocks seemed to be moving too quickly as it was going around a corner. This, the same corner the Model 3 was rounding in the opposite direction.

The owners said it was clear the truck was moving too quickly, and it appeared to be leaning as it took the curve. Not surprisingly, a pallet of blocks came off the truck and crashed onto the Model 3’s front windshield, crushing the car badly. Collins shared via Teslarati:

“I could see the lorry appeared to have gone too quickly around the corner because it was really leaning over, so I thought, ‘Oh blimey, that doesn’t look very good.’ Then we came alongside and I could see the blocks sliding off.”

The incident can be seen quite clearly in the TeslaCam video embedded above. The blocks destroyed the Tesla’s windshield and crushed the front of the car. One might assume that whoever was beneath the heavy blocks would at least sustain some notable injuries. However, the couple reportedly walked away with minor bruises and cuts. Collins elaborated:

“Before I could react, within a split second, it had gone bang and glass was everywhere, and there was smoke. Next thing I knew, the emergency services were being called. The windscreen collapsed, but it pretty much held. It was quite amazing that we walked away.”

Collins said he was completely shocked that the brand-new Model 3 held up as it did. This was especially true when he got a chance to look at the damage to the outside of the car. The couple is still waiting to find out what might happen to the driver of the truck due to the accident. Collins said he believes the truck driver may have assumed the passengers in the Model 3 were killed.

Apparently, this type of accident is very common in England, and typically, according to Collins, the drivers aren’t held responsible, even when there are fatalities.

Do you think the Model 3 deserves credit here, or would most cars hold up and protect occupants in such a situation? Start a conversation in our comment section below.