While the market is falling, foreign models led by the Tesla Model 3 are shining.

Let’s start with the general outlook – the overall market went down by 22% year-over-year, while the plug-in segment dropped by 50% year-over-year to 51,217, according to the EV Sales Blog.

That’s not bad, but there are many factors (including Chinese New Year in January compared to February in 2019) behind it. As a result, the plug-in market share decreased to 3.2% (from 5.5% year ago).

The big news is that Chinese customers are now more interested in foreign brands than ever before. The share of Chinese plug-in cars fell from 85% a year ago to 64%.

One of the biggest surprises is that the Tesla Model 3 managed to reach #1 place in the model rank in January with 3,183 registrations (including 578 imported). It’s the first time for Tesla to take the first spot and the first time for a foreign model.

The second best was the new all-electric station wagon SAIC Roewe Ei5 (3,068), while the third was a plug-in hybrid BMW 530Le (3,000) – for the first time we see two foreign models on the podium.

Chinese manufacturers seem to be in really deep trouble if foreign brands are grabbing the market so fast – even before they really started (just imagine all those big global OEMs and their upcoming lineups). 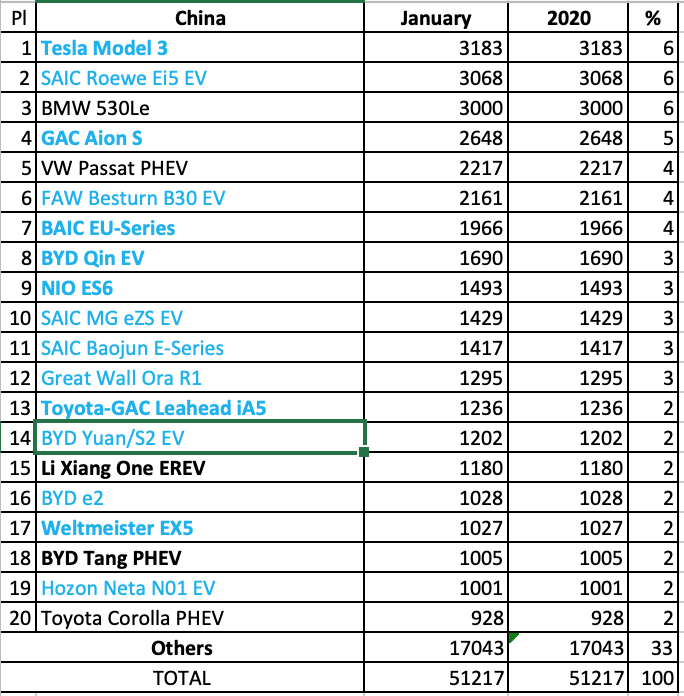