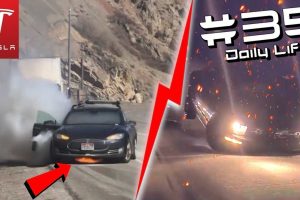 It’s time for loads of Tesla dashcam footage to keep you entertained.

Years ago, when we started covering electric cars, we never thought we’d be occasionally sharing dashcam videos of crazy car-related incidents, such as road rage, car crashes, and vandalism. However, Tesla’s standard built-in dashcam (TeslaCam) came to market, and the videos hit the internet by storm.

While we share the TeslaCam and Sentry Mode version of “America’s Funniest Home Videos” because we realize it’s fascinating and entertaining to many folks, there’s a larger message here. Remain aware and drive defensively. There are many crazy people on the road. Moreover, safety organizations and all automakers need to pay close attention. There’s no reason a built-in dashcam feature shouldn’t be standard on all cars in the near future.

It’s important to point out that Tesla uses its Autopilot cameras to make TeslaCam and Sentry Mode possible. While some cars don’t come standard with built-in cameras, many of today’s cars have advanced driver-assist systems, which rely on cameras, radars, lasers, etc. With that said, a software update should be able to make something like TeslaCam possible in other vehicles. However, safety organizations may have to put pressure on automakers to get them to implement the technology.

In this recent episode provided by YouTube channel Teslacam Supercharged, we see a wide variety of Tesla dashcam footage, as well as some related footage that was captured by other cars’ aftermarket dashcams and/or onlookers.

The video’s “title” footage revolves around a Tesla Model S fire and Ford Mustangs crashing. Nothing like have Tesla, fire, and Mustang in the title. However, there is a myriad of other TeslaCam footage that’s arguably equally interesting.

Do you own a Tesla? If so, do you actually use TeslaCam and Sentry Mode? Let us know what you think of the technology and whether or not it has helped you in any way. Start a conversation in the comment section below.