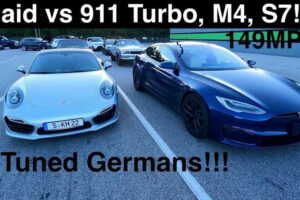 Which legendary sports car is capable of beating the Plaid, so long as it is tuned?

It certainly comes as no surprise that the all-new Tesla Model S Plaid can blow away most cars  and there’s no need for it to be tuned in any way. It’s the quickest production car ever built, and its incredible torque and acceleration have been proven time and time again. If you’re not convinved about the Plaid’s otherworldy acceleration, just ask Doug DeMuro.

We don’t often see tuned electric cars, though it is possible. This is one complaint from the hardcore gas-car community. Some car lovers simply love to tune their cars, much like the Audi S7, BMW M4, and Porsche 911 seen in this Tesla Plaid Channel racing video. There’s still a huge market for tuning in the gas-car world, and it’s something some people may miss as they make the switch to an EV.

When it comes to electric cars, rather than actual powertrain tuning, we see aftermarmet parts that enhance and improve performance in other, more subtle ways, such as rims, tires, spoilers, weight reduction, etc.

Without watching the video above, we already know the Model S Plaid can easily beat the Audi, BMW, and Porsche with its acceleration. However, we’ve seen some tuned and trailered cars overtake the Tesla, so it’s interesting to see how these iconic German sports cars handle the quickest production car on the planet.

Don’t worry, we’re not about to spoil your fun, though we will say that one of the tuned German sports cars does beat the Model S Plaid by 0.07 seconds. The other two lose to the Plaid, and the Tesla also shows a Dodge Charger who’s boss. However, the Model S Plaid driver admits he was sandbagging in all the races to assure a close ending.

Tesla Plaid Channel points out that the first run (solo Model S Plaid) uses both Drag Strip mode and Launch Mode. However, all the other races are run in just Plaid mode. Had the races all been performed with the latter modes, the Model S Plaid would have performed even better.