Home » Electric Cars » Tesla Model S Plaid: What's It Like To Own As Your Daily Driver?

Tesla Model S Plaid: What's It Like To Own As Your Daily Driver? 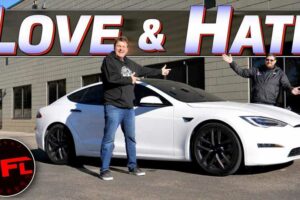 The Tesla Model S Plaid is the quickest production car ever made, and while it’s quite expensive, it costs less than many rivals, and much less than the impractical supercars and hypercars it can outrun. However, is it worth it as a daily driver?

Can you live with the high-performance Model S on a daily basis and justify its $130,000 price tag, especially when the Long Range version is nearly the same car at a $35,000 discount?

The Fast Lane Car recently posted a video about Model S Plaid ownership entitled “Here’s What It’s Like To Own The Tesla Model S Plaid: Dude, I Love (Or Hate) My Ride!” However, the publication didn’t race out to purchase a Plaid so it could provide a review. The “Dude” series features owners sharing what they love or hate their new cars.

While TFL Car has bought some Teslas in the past for its own reviews, it arguably doesn’t make sense to buy the pricey Plaid as a long-term review car unless you really plan to use it as your daily driver. That said, a publication purchasing a Plaid could likely sell it after a spell and not lose money. In fact, depending on the details and the market at the time, buying any Tesla and then selling it shortly thereafter could net folks a profit.

At any rate, TFL Car turned to Model S Plaid owner Chris to share what it’s like to live with the car. Chris has owned the Plaid since September, and he’s put about 6,000 miles on it. It cost him about $144,000 out the door.

It comes as no surprise Chris is blown away by the Plaid’s acceleration, though he says he hasn’t pushed it to its limits. He feels a bit scared to overdo it, and he’s played it safe thus far (this is why we encourage people to consider the Model S Long Range instead). He also says road trips have been great, and he typically only spends about 20 to 30 minutes Supercharging. Chris warns that if you own a Plaid, you should be prepared to attract plenty of attention from onlookers and folks who to learn more about it (or race you).

Chris goes on to talk about Tesla Autopilot, as well as Full Self-Driving Beta, which he’s not yet approved to use. He also discusses build quality issues and various squeaks and rattles. Needless to say, Chris has plenty to share about the Plaid. Can you guess if he loves it or hates it?

Check out the video for all the details. Then, scroll down to our popular comment section and start a conversation about the Tesla Model S Plaid.