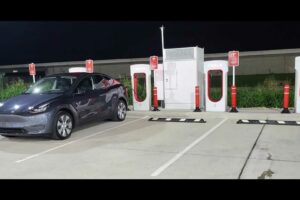 Tesla has officially started delivering its new Model Y crossover that’s produced in Texas with the 4680 battery cells and structural pack. As people begin to provide videos and articles about the car, we’ll finally learn more about its real-world range and fast-charging capability. The video above from Spoken Reviews gives us one of the first looks at the new Model Y variant’s range and charging.

We’ll remind you upfront that there are many factors and variables involved when it comes to an EV’s range and charging. Hopefully, we’ll be able to get our hands on one of these new Model Y SUVs at InsideEVs sooner rather than later. This way, we can run our 70 mph real-world range test and a full charging curve analysis.

In the meantime, we’ll be sharing what we learn about the new Model Y from owners and those who’ve had a chance to test it out. Tesla has provided very little information about the car, which is frustrating, but not surprising. Unlike other automakers, Tesla doesn’t often provide all the details, and there’s no one to reach out to with questions. We can only hope Elon Musk shares more details on Twitter.

Spoken Reviews attempted to figure out the Model Y’s total energy capacity. He shares that the crossover accepted 59 kWh while charging from 9 percent to 97 percent. Some quick math puts the Model Y’s usable battery capacity at around 66 kWh.

The channel estimates that the Texas-made Model Y has a total battery capacity of 75 kWh, and is software limited. The channel figures Tesla is hoping to keep people from dropping their Model Y Long Range orders by keeping the Standard Range model’s range slightly limited.

At any rate, it appears based on the video above that the new Model Y variant has the potential to charge quite quickly. Spoken Reviews headed to a Tesla Supercharger to provide a quick look at a charging session, complete with a basic charging curve. The findings were as follows:

The channel adds that charging to 80 percent in about 30 minutes is impressive. The Model Y’s charging session topped out at 227 kW, which is less than that of the Model Y produced in Fremont with 2170 cells, which is capable of charging at up to 250 kW.

According to Electrek, Tesla may still push software updates to make improvements to the new Model Y’s charging rate. With that said, let us know what you think after checking out the video above.