Tesla is frequently accused of being a fraud, but we have never seen a fraud pump 1,000,000 cars out of production lines. This is exactly what Elon Musk celebrated on Twitter this March 10 with a picture of a vehicle that is still not on the delivery phase but is already a landmark for the EV company: the Model Y. 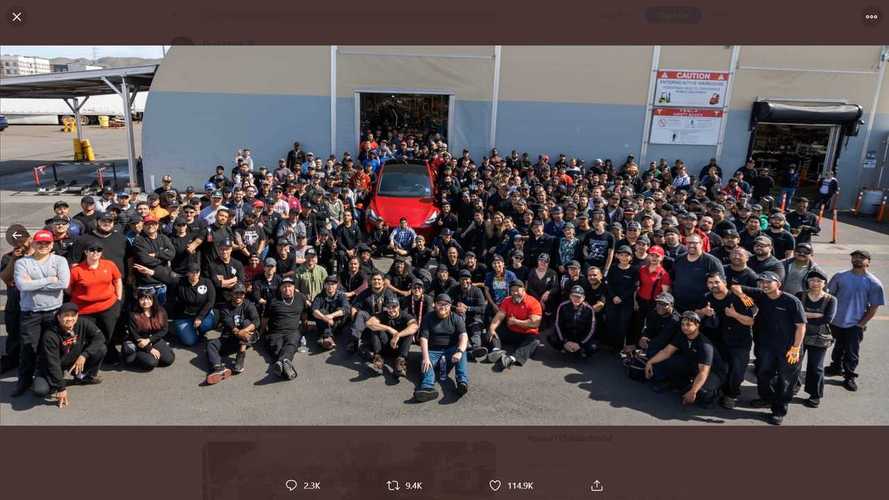 A shiny red example of the SUV was among some of Tesla workers in one of the two pictures Musk shared on Twitter and by itself in the other one. Although it is yet to reveal how innovative its electric architecture is, as well as its manufacturing, the Model Y already secured a place as one of the most meaningful vehicles Tesla has ever produced apart from these technical aspects.

The announcement was enough for a lot of praising and also vicious attacks. One of them was made by a satirical Twitter profile willing to promote itself. It may have been a smart move for attracting attention, but it also shows the basis for Tesla hate is nothing to laugh about.

Another Twitter user, Aurux Xuruö, came up with interesting numbers. Until December 31, Tesla would have built 893,450 vehicles in its entire life. If that is correct, the company would have made 106,550 cars in the Q1 2020 alone – with 16 working days to go.

That would not be a surprise considering there are now two factories producing Teslas: Fremont and Giga Shanghai. If it were not for the coronavirus outbreak, these numbers would probably be even better. It also allows us to expect bolder accomplishments in a much shorter time.

Tesla can reach 2,000,000 cars in only a few years. If this 100,000 units per quarter pace were to remain the same, that would demand two and a half years to get there. But that is expected to increase rapidly. Some Twitter users believe Tesla could reach that number in 2021. Should Elon Musk’s expectations for the Model Y be correct, this EV alone could help these users be right.