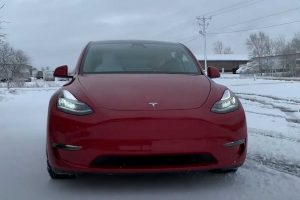 This is why over-the-air updates are so necessary and convenient.

According to a recent report published by Electrek, Tesla is pushing out a new over-the-air software update to help with Model Y cold-weather issues. Apparently, the electric automaker took notice during the Model Y’s first winter and is working to make it right.

As we often say, when Tesla first started selling cars, and for years after that, there weren’t a whole lot of Tesla owners in the coldest U.S. states. In fact, the bulk of early sales were in California, The Golden State. Even today, Tesla sells more cars in California than any other state.

With that said, when people in very cold areas started buying Tesla vehicles, there was a lot of media coverage related to the cars’ reduced range and slow charging in colder climates. Tesla has been working to help with those issues. The Model Y came to market as the first Tesla with a heat pump, and now the Model 3, Model S, and Model X all have heat pumps.

Not all cold-weather issues are related to range or charging, however. When it comes to Tesla’s vehicles, owners have voiced other concerns, such as frozen windows and doors, as well as similar issues with the cars’ charging ports.

Tesla recently initiated some minor software fixes, which should help with the cold-weather concerns. It has made a point of sending winter-related updates in the past. According to Electrek, the recent update is ‘2021.4.21.’ The only details in the release notes are “Minor Cold Weather Improvements and Bug Fixes.

Tesla’s over-the-air update capability is a game-changer and one of its major advantages over other automakers. We can only hope such technology will be the norm for all carmakers going forward.