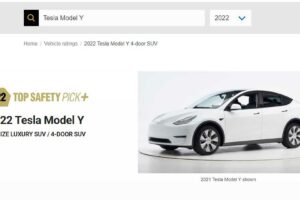 The Tesla Model 3 sedan and Tesla Model Y crossover were both among the long list of winners of the Insurance Institute for Highway Safety’s (IIHS) most coveted award, the Top Safety Pick+.

It’s important to point out that the year of the award can be very important when it comes to IIHS. For example, you have to look closely to determine whether a model is designated as a 2021 Top Safety Pick+ or a 2022 Top Safety Pick+. The reason for this is that IIHS updates the criteria to make it more difficult to get the award, and to encourage automakers to produce safer cars.

That said, the organization didn’t change the criteria going into 2022. So, it’s the same as last year’s, though more cars qualified this time around. In fact, a total of 101 models earned a 2022 Top Safety Pick or Top Safety Pick+ award, up from 90 in 2021. This was mostly due to new or redesigned models getting an award, as well as automakers making improvements to vehicles’ headlights to perform better in the testing. Of the 101 total models, well over half earned the more prestigious “Plus” award.

The organization plans to make the criteria more difficult next year. To be an IIHS 2023 Top Safety Pick+ award winner, vehicles will have to earn the highest rating of “Good” in a more difficult side-impact crash test. IIHS President David Harkey wrote in a statement shared by Consumer Reports:

“A key reason vehicles have continued to get safer over the more than 25 years since the [IIHS] began our ratings program is that we have never shied away from raising the bar. The high number of Top Safety Pick+ winners shows that it’s time to push for additional changes.”

Both Tesla vehicles earned the highest rating of Good in all six IIHS crash tests, as well as the top rating of “Superior” for their standard vehicle-to-vehicle and vehicle-to-pedestrian front crash prevention systems, which no longer rely on radar.