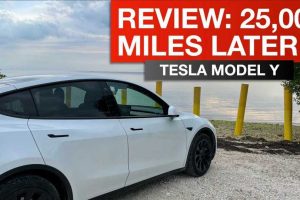 The more you keep a car, the more you learn about it, so this owner review should be pretty insightful.

It’s one thing to get to test drive a car for a couple of days, or even weeks, and it’s a totally different thing to actually live with it and put serious miles on it. That’s why either long term reviews by reputed journalists or actual owners, people who have paid for a car, like Justin, the Bearded Tesla Guy.

He’s had his Tesla Model Y Long Range AWD for just over 11 months in which time it has covered some 25,000 miles. Justin points out that most of those miles, 16,450 miles exactly, were racked up through the daily commute and day-to-day driving and the rest, 8,550 miles, were done on road trips outside of town.

Justin doesn’t seem to have any reservation praising his Model Y, even though it has not exactly been perfect. He only paid out of pocket for some new tires and windscreen wipers, but the car needed to go in for servicing a total of five times, including to replace a burnt out headlight, as well gearbox fluid service.

It is also worth noting that Justin’s Model Y was among the first 3,000 or so examples manufactured before Tesla shut down the factory due to the pandemic. Some of the service visits were to correct issues that Tesla eventually fixed, although the purpose of one of the visits was to install a heat shield for the heat pump (the first batch of Model Ys manufactured were shipped without it).