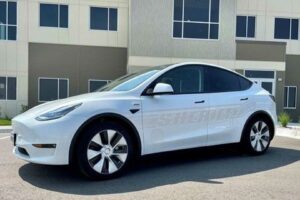 It looks like Model Y could be cheaper to own than a gas car after as little as 6 months of not paying for gas.

How do you justify the high sticker cost of an EV like the Tesla Model Y compared to less expensive, gas-powered rivals? According to a post by the Boulder County Sheriff’s Office, its 2021 Model Y fuel cost and maintenance are anticipated to be much lower than its current patrol vehicles.

This was to be expected, so it comes as no surprise to us or most folks who follow the EV segment. In fact, the Boulder police department was able to justify the extra cost of the Tesla based on the fact that it will be cheaper to own over time. However, the savings are much more substantial than many people might expect, especially since the Model Y isn’t cheap, with its starting price of well over $50,000. Keep in mind, that price goes up quite a bit once the car is outfitted as a police car.

“… we will be testing a 2021 Tesla Model Y Long Range AWD as a patrol vehicle. We are keenly aware that many people perceive Tesla vehicles as “luxury vehicles,” and while that is true for a large segment of their product line, Tesla’s mission has been the proliferation of electric vehicles (EVs) into the mainstream market.”

The department also notes that Tesla’s vehicles have become more affordable over the years, likely in reference to the launch of the Model 3 and Model Y. The department goes on to say that current Model Y specs are also comparable to a gas-powered Ford Police Interceptor SUV. Not to mention “exceptional safety, performance and reliability.“

So, how much savings are we looking at here?

The Boulder Office says its data shows that the extra initial cost of the Model Y could be made up within just 6 to 18 months. In addition, as the department sees the average life span of a patrol car at five years or 50,000 miles, the savings over the longer term could be massive. We’re talking about a savings here of over $16,0000. Just think of how much police departments across the globe could save with whole fleets of EVs. The office writes:

Check out the source link below for more details from the Boulder County Sheriff’s Office. Then, start a conversation about this topic in our comment section.