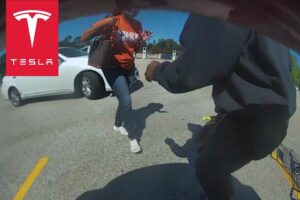 Tesla’s Sentry Mode is responsible for tons of video content, from the funniest to the most frightening.

Unfortunately, the following piece of footage uploaded by Wham Baam Dangercam is from the latter category. It was taken by a Tesla Model Y’s cameras in Spring, Texas, showing how the EV owner was robbed at gunpoint in a supermarket parking lot.

According to Montgomery County Sheriff’s Office cited by KPRC Click2Houston, the robbery happened on September 23 around 11:30 am. The woman was at a Walmart on Sawdust Road in Spring, and had just unloaded groceries into her Model Y when a man wearing a mask pointed a gun at her asking to hand over the purse.

Kimberly Dixon, the robbery victim, was obviously frightened but kept her cool and gave the man her purse. The robber immediately hopped into white Lexus ES 350 that had pulled up behind the Tesla and quickly disappeared with his accomplice, also believed to be a male.

Luckily for the woman, her phone was not in the purse but in her pocket, so she was able to use it to unlock the car, call her husband, the police, and also honk the horn in order to save the Sentry Mode clip.

Thanks to the footage, she was able to take screenshots of the suspects and their getaway car, which turned out to be stolen. According to MCSO deputies, at least one of the suspects and the same Lexus LS 350 appeared to have been involved in an aggravated robbery of a Texaco on Rayford Road in Spring the next morning.

On September 26, the criminal duo hit a different gas station in The Woodlands, Texas. Deputies located the vehicle, and after a pursuit into Houston, one of the suspects was arrested. The arrested male was identified as a 15-year-old juvenile with a criminal record. He was charged with Aggravated Robbery and Evading Arrest/Detention with a Vehicle. It is unclear whether he was the one pointing the gun or driving the Lexus in the above video.

Detectives are investigating the Aggravated Robbery incidents as well the identity of the second robbery suspect. They are now asking the public to help identify the second suspect and contact MCSO in case they know anything about him.