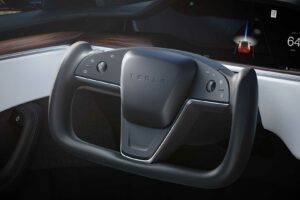 Musk says he thinks the yoke is great, and Tesla will aim for progressive steering in a few years.

Despite mixed opinions, as well as outright opposition from some, Tesla is reportedly keeping the yoke in its Model S Plaid, and it may not offer a “normal” option. Early on, people thought perhaps the yoke was a joke. Later, there was talk about it being an option in the Model S. Now it seems clear, it comes standard. It also seems there’s no optional round steering wheel for people who’d prefer to say nope to the yoke.

A yoke may be a “cool” feature to show off, and it has its place in racing, but many argue it simply doesn’t make sense for the average daily driver. In fact, people have gone so far as to say it’s unsafe since most drivers aren’t used to it.

When you’ve been driving for years and years, and you have a certain way you hold a steering wheel, handle turns, and let it slide through your hands, the yoke is almost certain to trip you up. You can’t easily hold it at the bottom or the top, it’s not necessarily easy to deal with at low speeds, and it certainly doesn’t pass through your hands with ease or allow you to handle certain turns with one hand, or a hand-over-hand type method.

With that said, drivers will eventually get used to it, just like we do with anything new. There’s a learning curve, and our muscle memory will adjust over time.

Tesla CEO Elon Musk says he’s been driving with the yoke for some time, and, in his opinion, it’s “great.” This, in a reply to a Twitter comment asking about the potential for progressive steering. Musk says progressive steering would be complex, but Tesla will “aim” for it in a few years.

In short, progressive steering adjusts dependent on speed. This means it would help the car handle even better at higher speeds. At the same time, it would allow the steering to require less effort at lower speeds.

Do you think the Roadster will also have a yoke? It seems highly likely, and it was seen on the prototype, but who knows what will happen between now and the next-gen Roadster’s release. Others have pointed to the yoke in the Cybertruck. What do you think about that?

We wonder if the yoke is enough to turn some people off to these cars. We also think it would make sense for Tesla to at least offer a “normal” option. Let us known your thoughts in the comment section below.