Home » Tesla Says All Supercharger Energy Will Be Renewable In 2021

Tesla Says All Supercharger Energy Will Be Renewable In 2021 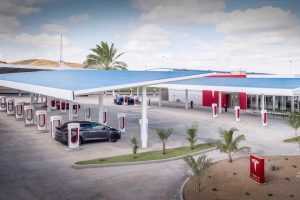 Tesla’s Supercharger network provides it with a massive advantage, and now it will be even cleaner.

Reportedly, on Earth Day, Tesla announced that it has plans to power all Superchargers with renewable energy by the end of 2021. This would work to significantly reduce costs over the long term and make driving a Tesla even better for the environment.

Tesla’s Supercharger network is arguably one of its top advantages over other brands that are producing electric cars. While most other automakers count on third-party public charging options, Tesla is constantly improving and expanding its fast and reliable Supercharger network.

Keep in mind, Tesla also has its own solar business, so this plan won’t really be something new for the automaker. Even if competing brands decided to roll out a massive network of public fast-chargers over a short period of time, there’s a pretty solid chance they’re not planning to make them all run on solar energy. And, if they did, they may have to go to a company like Tesla for help. Apple recently announced that it’s using Tesla’s battery storage systems at its California solar farm.

The report about the Superchargers running on renewable energy was published by Electrek. As the story goes, Tesla’s marketing chief for mid-Atlantic Superchargers Justin Lange posted some interesting information about Tesla’s Supercharger network and its progress. The post surfaced on Earth Day and include the following sentence:

“Additionally, all our Supercharger energy will be 100% renewable in 2021.”

This seems like a very lofty goal. Can Tesla do it? Do you believe this will apply to all areas across the globe, or just to those that Lange is responsible for?

Check the source link below for more details. Then, start a conversation in our comment section.