Tesla Semi Will Have A 500-kWh Battery Pack 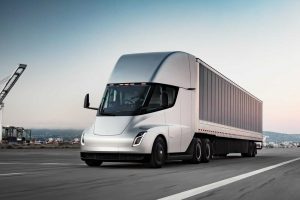 But, there will be a bigger battery pack offered.

It seems like Elon Musk enjoys spilling Tesla news all over Joe Rogan while being interviewed on his podcast. In his latest visit with Joe Rogan, we have already reported that he discussed how he wants to make the Roadster hover, and how the Cybertuck will be about 3 percent smaller.

Out of the many neat things they chatted about, Elon talked a little about the upcoming Tesla Semi, and told us about one of the battery pack sizes:

That battery pack should be in the 300-mile range model that currently has a price tag of $150,000 according to the reservation site. As for the $180,000 500-mile model, we can only guess the size. But, with almost twice the driving range, the larger battery pack could be between 800 and 900 kWh. Since the longer-range Semi is coming later in production, maybe Elon will tell us the battery size next time he is on Joe Rogan’s podcast.

The Tesla Semi’s battery pack will use the company’s new 4680 battery. We recently shared a video showing the 4680 battery cell production at Giga Berlin.

With the engineering on the Semi already completed, Tesla plans for production in late 2021 at the Giga Texas facility that’s still under construction. Rumor has it that Tesla might produce as much as 2,500 Semis this year. There is also a good chance that the Semi will be Tesla’s first fully autonomous vehicle.

If you’re curious about how the Tesla Semi looks up close, check out these videos, and these photos.