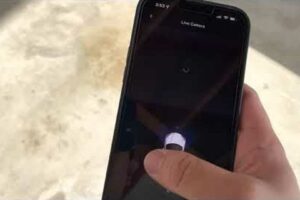 In Tesla’s recent software update, the company released a new security feature that enables Tesla owners to remotely view what’s happening around their vehicles in real-time using their mobile phones. This feature is called Sentry Mode Live Camera Access (read release notes and requirements). And it may also allow you to use the ‘dark side’ of the force. We’ll explain.

Aside from being able to watch around the car from a remote location, there’s an especially cool feature Tesla implemented as well. While you’ve opened the live camera view of your parked Tesla, you can also speak to those in close proximity to your vehicle. And you can turn your voice ominous if desired.

How? Well, this Tesla feature will allow you to lower and amplify your voice via an external speaker installed under the car. Teslas built after January 2019 have a special speaker installed as part of the pedestrian warning system, a requirement by the NHTSA.

Tesla owners will now be able to warn potential vandals by issuing verbal warnings from a remote location. This should help to decrease cases of Tesla vandalism that have, unfortunately, intermittently occurred in the past.

Social media first helped spread awareness of Tesla’s Sentry Mode and eventually sparked widespread coverage of random vandalism cases across the mainstream media. Thankfully, knowing that a Tesla is recording any potential act of vandalism via multiple cameras has lowered the number of cases.

One of these instances was a well-known Bay Area case where two vandals keyed a Tesla Model 3 multiple times not knowing the car was recording them. Later on, these guys turned themselves in to the police as the videos went viral and aired on national television.