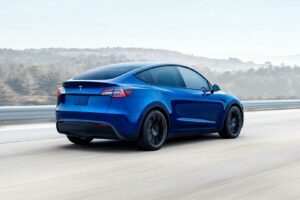 Posted on EVANNEX on January 22, 2023, by Peter McGuthrie

As the Federal Reserve hopes to engineer a “soft landing,” effectively steering the economy clear of recession while maintaining inflation, companies like Tesla could benefit greatly. So much so, in fact, that one investment firm has chosen Tesla amongst a list of companies that could be well-poised if the Fed succeeds.

Tesla is one of 46 companies to make a recent Goldman Sachs list of stocks that would benefit from Fed hopes for a soft landing, following recent interest rate hikes, according to The Street. The list focuses on companies with over $5 billion in market capitalization in cyclical industry groups, with a few other stipulations for inclusion.

The Altman z-score index determines how close companies are to bankruptcy, with higher scores representing lower chances of bankruptcy. The list from Goldman Sachs includes Russell 3000 companies that are profitable with Altman z-scores below their 10-year median. It excludes some energy-specific companies and others that have outperformed their larger industry groups since 2021, though Tesla is considered diversified enough to be included.

The Goldman Sachs list includes many capital goods and diversified financial stocks, all with a median market cap of $10 billion. One fellow diversified tech stock included on the list was fellow tech stock AMD, alongside other noteworthy stocks such as Capital One Financial, 3M, Parker Hannifin and several others.

“However, fourth-quarter deliveries still grew 31 percent year over year, which we view as a sign that demand is still present, and the company can still grow,” Goldstein wrote in a commentary.

A Tesla spokesperson in Germany recently said that the automaker’s price cuts were due to “a partial normalization of cost inflation,” according to Automotive News, and echoing recent similar sentiments from an executive in China.

“At the end of a turbulent year with interruptions to the supply chain, we have achieved a partial normalization of cost inflation, which gives us the confidence to pass this relief onto our customers,” the spokesperson said.

Calming inflation and job growth are welcome signs for investors and economists alike, and some think the Fed may be seeing signs of a soft landing as these factors ease. Tesla and the other Goldman Sachs-list-included stocks could be prepared to face an interesting 2023, with many predicting a successful soft landing to spur on continued growth.