Tesla Teases New Products, Though They're Related To Its Energy Biz 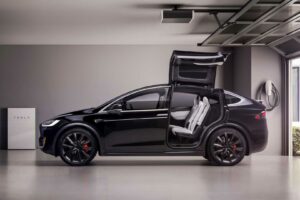 Tesla has been touting its energy division for some time now, insisting that it will grow immensely in the future and become a huge facet of the US automaker’s overall business. However, it simply hasn’t yet caught on in the way that Tesla’s EVs have. That said, the company continues to make notable strides, and now some new Tesla energy product details have leaked.

According to reports, Tesla teased some upcoming energy-related products at an internal meeting that happened recently. Reportedly, the products are set to launch later in 2022, and it appears Tesla will use the product releases in its continued efforts to greatly accelerate its energy business in the near future.

Tesla is already working to expand its solar business, which saw its best quarter in four years in Q2 2022. Solar roof installations certainly aren’t as popular as electric cars, and they’re not something that the media spends a great deal of time publicizing. However, more and more people are adopting energy products much as they did with EVs years ago. It’s arguably only a matter of time before solar systems and home energy storage batteries begin to become more commonplace.

Based on the information from the internal meeting, Tesla is working to change its energy product strategy. Currently, the company’s energy division uses a mix of its own products, equipment, and software, as well as that of others. However, sources note that the meeting exposed Tesla’s plans to switch to using its own equipment and software going forward. This makes sense since the automaker has tried to keep as much of its EV business in-house as well.

Not long after the private meeting, Tesla Energy’s senior manager of solar products and engineering Seth Winger actually teased the new products and briefly mentioned an upcoming pilot program. According to Electrek, which happened to get access to slides from the meeting, the new products will feature better performance and aesthetics while also being easier to install. The publication shared some of Winger’s words:

“In 2022, we are heavily investing in Tesla products. I can’t say exactly what is coming. We want to maintain confidentiality, but across the board on PVs, on Solar Roof, on Powerwall — look forward to greatly improved installation efficiency, aesthetic, and product performance.”